BORN
1925
DIED
2019
FUNERAL HOME
Lima & Campagna Sunnyvale Mortuary
1315 Hollenbeck Ave.
Sunnyvale, CA
Rex Devon Lindsay
July 12, 1925 - April 18, 2019
Resident of San Jose
Rex Devon Lindsay passed away peacefully on April 18, 2019, at the age of 93, with love for his late wife Leanor, their family and friends in his heart. Rex led a life of compassionate leadership and generosity, flavored by a quick wit, generous spirit, and love of the outdoors. Singing was one of his great joys; he had an unforgettable, rich tenor voice.
Born July 12, 1925 in Decatur, Illinois, Rex was the third of the six children of Clifford and Velma Lindsay, whose family was challenged by the hardships of the Great Depression. Rex earned his Bachelors' Degree in polymer chemistry at the University of Illinois in 1947, then headed west to earn his Master's Degree in biochemistry with a minor in organic chemistry at Oregon State University in 1949. There he met the love of his life, Leanor "Lee" Margaret Locher, when she purportedly borrowed his glassware in chemistry lab. They married in 1948, and Rex adored Lee for 67 years and beyond. Besides an unfailing love for each other, Rex and Lee shared a generous love of family and friends, music and dancing, and the communities they inhabited and served. Leanor Lindsay passed away April 22, 2015, and the family now envisions them dancing together again.
In 1951, Rex and Lee headed to California with their young daughter, Linda. Rex ran various manufacturing operations (blood products) at Cutter Laboratories for 10 years. He was a key member of the founding team at Memorex where he served as Plant Manager, then Vice President of Manufacturing Operations. Originally a magnetic tape manufacturer, Memorex was one of Silicon Valley's first computer-related start-ups and became a household name. In 1967, he founded Plastronics Corporation, which merged into Data Technology, where he served as President and CEO. From 1972, Rex served as a management consultant with companies in the electronics industry, including International Industries Inc. and Silicon Valley Group.
Rex and Lee bought a cattle ranch on Mt. Hamilton in 1966, and "retired" there in 1978. This was a dream come true. They so enjoyed raising beef cattle, riding horses, and hosting friends and family in outdoor activities, good food, and game nights. Rex drew people in with his energy, sense of humor, and welcoming spirit.
Rex devoted himself to political and community affairs. This included stints as Chair of the Parks and Recreation Commission and Planning Commission for Santa Clara County, participation in county task forces on various topics, and fundraising for political and civic organizations. He was a Founding Director of Cupertino National Bank and served in many roles on that Board. He also was part owner, consultant and Board Member of Santa Clara Land Title Co. He continued to consult on land use, development, financial management and management reorganization projects for many years.
Over the years, Rex assisted with planning and fundraising efforts for many charitable and public service organizations. He and Lee served together on the Sacred Heart Community Services Board for 25 years. Rex worked extensively on Santa Clara County land matters on numerous committees: County General Plans of 1980 and 1994, Trails Task Force, Open Space Task Force, San Jose Open Space Green Belt Task Force, Open Space Preservation 2020, Guadalupe River Task Force, IGC Trails Committee, San Jose Chamber Political Action Committee, Lands Committee of the California Cattlemen's Association, Farm Bureau, Cattlemen's Association, Property Rights Coalition, and Mt. Hamilton Range Improvement Association.
Rex is now with the Lord, renewed and reunited with his dear wife Leanor, parents, brothers Don and Max Lindsay, and dear friend Father William O'Keeffe. Rex will always be remembered lovingly by his sisters Nita Salmons (Bill), Norma Goodier and Ann Zadra; his devoted children and their spouses: daughter Linda Doody (Joe), daughter Margaret "Peggy" Dreyfus (Chas), and son Leonard "Buzz" Lindsay (Barbara); grandson Drew Lindsay; granddaughters Marika Galvin (Tim), Jaime Plewa (Joel), Caitlin Stetner (Kyle), and twins Erin Lindsay and Robyn Lindsay Seward (Pablo); and great grandchildren Brady and Trevor Galvin, Henry, Jack, Finn and Hazel Plewa, and James, Charlotte and Lauren Stetner. The Lindsay clan will cherish fond memories of their "Papa", which is a testament to the strong family that Rex and Lee created together.
The family is deeply grateful to Rex's dear friends and country neighbors who visited and supported him during his recent years. We give heartfelt thanks to the caregivers of Carlton Senior Living of San Jose (especially Yolanda) for their loving and cheerful attention, and to his hospice team at Vitas Healthcare for their compassionate care and emotional support.
Family and friends are invited to attend a Celebration of Rex's life at 10 AM on May 6, 2019 at All Saints Chapel, Gate of Heaven Catholic Cemetery, 22555 Cristo Rey Dr., Los Altos, followed by burial at 11 AM.
In lieu of flowers, donations may be made to Sacred Heart Community Service (1381 So. First St., San Jose, CA 95110) or Symphony Silicon Valley (Attn: Jennifer Watkins, PO Box 790, San Jose, CA 95106). 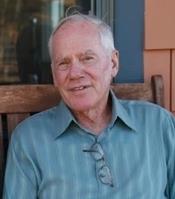