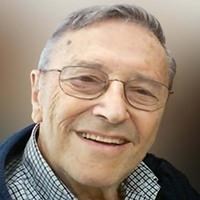 Richard Jack Pollak
November 16, 2020
Resident of Los Altos-Formerly of Palo Alto
Richard Pollak passed away peacefully at home on November 16, 2020 at the age of 95. He was a life-long aviation enthusiast and model builder, avid bridge player, and devoted husband, father and grandfather. He was born in Milwaukee, Wisconsin, the son of Lillian (Friedlander) Pollak and Joseph Pollak, and grew up in Los Angeles. During World War II he served in the U.S. Army Air Force in Burma and India as an engineer-gunner on B-25 bombers, flying 59 combat missions and receiving the Distinguished Flying Cross. He became an aeronautical and aerospace engineer after studying at Caltech and the University of Michigan. In the 1950s, he participated in pioneering work on "fly-by-wire" control systems for jet aircraft, working at Honeywell in Minneapolis and Northrup in Southern California.
In 1957 he married Anne Fishman and moved to Palo Alto, where they raised three children. Richard worked for most of his career at Lockheed in Sunnyvale on satellite systems until his retirement in 1992. He was predeceased by his wife of over 50 years, Anne (Fishman) Pollak and his sister Joan Kan; and is survived by daughters Susanna Lea and Jody Pollak; son Daniel Pollak; and granddaughters Jasmin and Jenna Mould. Contributions can be made in his honor to the Trust for Public Land.


View the online memorial for Richard Jack Pollak
Published by San Jose Mercury News/San Mateo County Times on Nov. 20, 2020.
To plant trees in memory, please visit the Sympathy Store.
MEMORIAL EVENTS
To offer your sympathy during this difficult time, you can now have memorial trees planted in a National Forest in memory of your loved one.
MAKE A DONATION
MEMORIES & CONDOLENCES
Sponsored by San Jose Mercury News.
0 Entries
Be the first to post a memory or condolences.