In Loving Memory
Robert J. (Bob) Levy
Sept. 20, 1930 - Aug. 10, 2015
Bob was born in Jamaica, NY, and graduated Brooklyn Technical High School with a Aeronautical major. He attended Hillsdale College in Michigan and NYS College of Forestry in Syracuse. He met his future wife, Louise White, in the Syracuse Outing Club. Bob served in Korea from 1951 - 1954. Bob and Louise married May 22, 1954, in Endicott, New York and remained sweethearts through their 61 years of marriage. Bob graduated from SUNY Albany with a BS Cum Laude in Math and an MS in Physics.
Bob and Louise managed John's Brook Lodge in the Adirondacks, then Bob taught high-school science in Newcomb, NY, and together they managed Adirondak Loj. Bob accepted a job at Systems Development Corp in the new industry of computer programming, and they drove to Santa Monica, CA, then to Colorado Springs, CO. The family drove to Poughkeepsie where Bob worked for IBM developing systems for the yet unreleased IBM 360, and then transferred to Cupertino, CA in 1968. Bob worked as a software developer for several firms, and briefly as a machinist. Bob took an interest in local politics and ran for Councilman.
Bob and Louise loved to explore this country, to hike, to camp, and to canoe, and took their 5 children to explore nature, parks, and museums across the US. They produced and sold the first trail guides for Rancho San Antonio and other area parks.
Together, they taught Red Cross First Aid and volunteered at polling places. They wrote books about their ancestors, and though this, made contact with, and kept in touch with, many distant relatives.
Bob and Louise lived in the family home in Cupertino until their deaths. They are survived by their daughters Ellen Finch, Ann Burns, Linda Levy, Susan Levy, and Sharon Williams, sons-in-law, six grandchildren, Bob's cousin Carol Anne Munson and her children, and Louise's niece, grandniece, and greatgrandniece.
Remembrance 2:00 February 25 at Union Church in Cupertino. 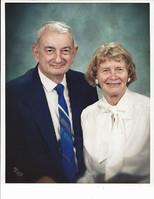 Published by San Jose Mercury News/San Mateo County Times on Feb. 25, 2017.
To plant trees in memory, please visit the Sympathy Store.
MEMORIAL EVENTS
To offer your sympathy during this difficult time, you can now have memorial trees planted in a National Forest in memory of your loved one.
MAKE A DONATION
MEMORIES & CONDOLENCES
Sponsored by San Jose Mercury News.
2 Entries
I offer my condolences to the family for the loss of Robert J.bob levy and his wife. I knew them very much because I visited with them at the house in Cupertino and saw him at Cupertino city council meetings when he spoke I was a frequent visitor at Cupertino city council meetings thanks also for your service to our country. goodbye my friend you and your family will always have a special place in my life and in my heart.
michael gottwald
April 22, 2020
As the days and weeks pass, and as you return to life's routine, may you continue to feel comforted by the love and support of family and friends.
John Wyant
February 26, 2017
Showing 1 - 2 of 2 results