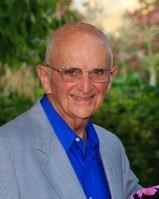 BORN
1929
DIED
2019
Sheldon Jacobs
September 15, 1929 – February 5, 2019
Resident of Saratoga
Shel Jacobs of Saratoga passed away peacefully on February 5, 2019 at the age of 89.
Born in Brooklyn, New York on September 15, 1929, he moved to Quincy, IL in 1941. After his high school graduation in 1946, he enlisted in the Army and served in the Occupation of Tokyo. Following his discharge in 1948, he attended the University of Illinois where he received a BS in Accounting. He married Jean Gilbert from the Bronx, NY in 1953.
He is survived by his wife, Jean, daughter, Linda Sue & her partner, Patrick Lecourt of Berkeley, CA, son, Dave & his wife Becky of Milpitas, CA, son Mitch of Saratoga, CA, and son Jeff & his wife Irene of San Jose, CA, seven grandchildren and two great grandchildren.
He started a 38-year career with IBM in 1952 as a Marketing Rep in Chicago, Il. In 1959, he transferred into Product and Business Planning in Endicott, NY. Subsequent Planning/Management assignments took him to San Jose, CA, Corporate Headquarters in Armonk, NY and a return to San Jose in 1965. He retired from IBM in 1990. He resided in Saratoga, CA since 1965.
Since retirement, he participated in several volunteer activities including the Santa Clara County Grand Jury, SCORE, Books Aloud, SeniorNet, Tax Counseling for the Elderly, and the California Highway Patrol.
Final internment will be in Madronia Cemetery in Saratoga.
There will be a Celebration of Life Reception at Saratoga Prospect Center in Friendship Hall located at 19848 Prospect Road, Saratoga, CA 95070 on Saturday, March 9 @ 1PM.
In lieu of flowers, donations may be made in Shel's name to the CHP 11-99 Foundation – devoted to the welfare of California Highway Patrol employees and their families @ https://chp11-99.org/donations/


View the online memorial for Sheldon Jacobs
Published by San Jose Mercury News/San Mateo County Times on Feb. 22, 2019.
To plant trees in memory, please visit the Sympathy Store.
MEMORIAL EVENTS
Mar
9
Celebration of Life
1:00p.m.
Saratoga Prospect Center in Friendship Hall
19848 Prospect Road, Saratoga, CA
MAKE A DONATION
MEMORIES & CONDOLENCES
Sponsored by San Jose Mercury News.
4 Entries
Shel, your work 50 years ago at IBM had a major impact on my education and career. It lives on today whenever I bring my students to experience the 1401 at the Computer History Museum. We all thank you!
-- Ron Mak
Ronald Mak
February 25, 2019
My condolences to the family . May you find comfort in your treasured memories and Gods promise to return your loved ones who passed away in death . 1 Thessalonians 4 : 13 , 14
Earnie Ray
February 19, 2019
Those who pass on God keep in his memory because he cares for them sorry for your loss.
February 19, 2019
We extend our condolences to the sheldon Jacobs familes and friends. 2 Cor. 1:2-4'
February 19, 2019
Showing 1 - 4 of 4 results