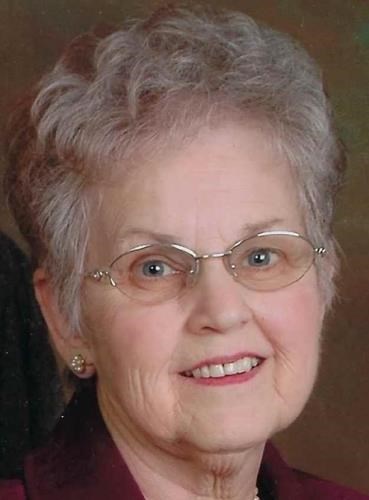 Janet grew up in a loving, Christian home on a farm in Phillipsburg. She was the third youngest of four children, of which she always proclaimed to be the orneriest one. Janet had a childhood full of fond memories and would reminisce of family gatherings, reunions, and time at church filling her growing up years. At 10 years of age, Janet was stricken with polio. She spoke often of how that disease helped shape her, giving her strength and ability to push through difficult circumstances. And with the Lord by her side, that strong will did carry her through many hard times. Janet graduated from Randolph High School in 1956. She met Jerry the summer before her senior year at a 4-H dance at the Miami County Fairgrounds. They were married on June 15, 1957 in Phillipsburg at Salem Church of the Brethren, and were blessed with three children, Julie, Jerry Lee, and Joe.

Janet enjoyed being a farmer's wife, loved being a mom, and years later, simply adored the title of 'grandma'. Family meant the world to her, and she meant the world to us. Janet was an excellent cook and loved nothing more than to have her family gathered around the dinner table. She worked as a bank teller out of high school, at Hobart Brothers for several years, and as a nanny for a family while they lived in St. Louis. Janet also volunteered at the county courthouse for several years. She always looked forward to the Miami County Fair. She took such pride in her kids/grandkids projects, and valued the chance to catch up with friends. Janet loved the Lord and was involved in various church activities throughout her lifetime, with choir being a favorite. She didn't know a stranger and was a great conversationalist. Her compassion, sincerity, and humility drew people to her.

There are many who felt a closeness to her, almost like that of another mother or grandmother. Janet had such a nurturing soul, and although she required the help and care from others as a sick child and as an aging adult, she still gave so much more than she ever received. The last chapter of her life was spent at the Randall House. Janet so greatly cherished her daily visits from Jerry. His love and devotion for her was one of the only things in her life that never changed. The amazing staff at Randall House became a second family to Janet like we couldn't have ever imagined. Words cannot express our appreciation for these beautiful people. In her one last gesture of giving, Janet chose to donate her body to the Boonshoft School of Medicine.

Friends will be received from 1:00 – 3:00 on Thursday, November 18 at Pleasant Hill Church of the Brethren followed by a celebration of life at 3:00 officiated by Pastor Nick Beam and Lynda Adams. Memorial gifts may be given to DayCity Hospice, 8039 Washington Village Dr., Suite 110, Dayton, OH 45458. Condolences may be shared at www.jackson-sarver.com.