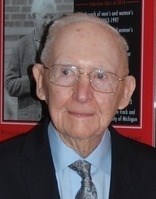 WILLIAM J. CORVO
Friend
February 11, 2021
I played Wesleyan football for Don Russell from 1968 through 1970, as well as Freshman baseball in 1968. To this day, it's hard for me to think of him as anything besides 'Coach Russell'...but as many of my teammates have observed, he was so much more. Along with my parents and one or two others, he was one of the people who had the profoundest positive influence on my life, and I'm grateful I got to tell him (and Joyce) just that before we lost him. Don't mind saying...I'm having a hard time coming to grips with a world that doesn't have Don Russell in it. Thank you Coach...for everything. Michael Kishbauch, Wesleyan '71
Michael Kishbauch
Student
February 6, 2021
r i p good man
Terry O'rourke
Friend
February 6, 2021
Coach Russell was a wonderful mentor to many young men. I had the privilege of playing Wesleyan Football for him from 1967 through 1969. He was admired and respected by his players and his colleagues. Our sincere sympathy goes out to his wife, Joyce and all the Russell family.
Sincerely,