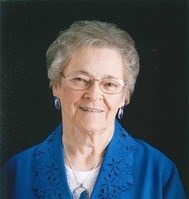 BORN
1934
DIED
2021
FUNERAL HOME
Torman Funeral Home
510 Flagg Street
Paw Paw, IL
Barbara L. Govig
Born: December 6, 1934 in Pingree Grove, IL
Died: August 23, 2021 in DeKalb, IL
Barbara L. Govig, 86, of Malta, passed away Monday, August 23, 2021, at Oak Crest Health Center in DeKalb. She was born December 6, 1934, in Pingree Grove, IL, the daughter of Clyde and Wilma (Cromeans) Duncan. She married Berdean "Bud" Govig on January 17, 1954, at the Malta United Methodist Church.
Barb graduated from Malta High School in 1953. She and her husband lived on the family farm on Shabbona Road since 1954. They farmed together in the Malta area for many years. When they weren't working on the farm, Barb and Bud enjoyed traveling together. She was a member of the DeKalb County Farm Bureau Prime Timers. She was a devoted member of the Calvary Lutheran Church. She belonged to several women's circles at the church and served on the altar guild for several years.
Barb is survived by her children, Barb (Larry) Fowler of Belvidere, Charlene (Dean) Johnson of Sycamore, and Jim (Lisa) Govig of Malta; a daughter-in-law, Stephanie Govig, of Castle Rock, CO; eleven grandchildren; nine great-grandchildren; and two sisters, Judy Martens of West Virginia, and Doris Taylor.
In addition to her parents, Barb is preceded in death by her husband, Bud; a son, John Govig; grandson, Barry Galitz; and a sister, Ethel Taylor.
The family would like to extend a special thank you to her lifelong friend, Marilyn Berg, Pastor Martha Nelson, Heartland Hospice, Dr. Dhaval Thakkar, Dr. Jagdish Patell, and the staff at Oak Crest for the care and comfort given to our mom.
Funeral service will be Monday, August 30, 2021, at 11:00 A.M. at the Calvary Lutheran Church in rural Lee with Pastor Martha Nelson officiating. The funeral service will be live streamed on the Jacobson-Torman Funeral Home Facebook page. If there are technical difficulties, the service will be recorded and posted on the Facebook page after its conclusion. Visitation will be at the church from 9:30 A.M. until the time of the service. Interment will follow in Union Cemetery. In lieu offlowers, memorials may be directed to Calvary Lutheran Church or Union Cemetery.
Arrangements by Jacobson-Torman Funeral Home in Shabbona.
Published by The MidWeek News from Aug. 24 to Aug. 25, 2021.
To plant trees in memory, please visit the Sympathy Store.
MEMORIAL EVENTS
Aug
30
Visitation
9:30a.m. - 11:00a.m.
Calvary Lutheran Church
in rural Lee, IL
Aug
30
Funeral service
11:00a.m.
Calvary Lutheran Church -- The funeral service will be live streamed on the Jacobson-Torman Funeral Home Facebook page.
in rural Lee, IL
Funeral services provided by:
Torman Funeral Home
MAKE A DONATION
MEMORIES & CONDOLENCES
Sponsored by Torman Funeral Home.
1 Entry
So sorry for your loss. Praying for comfort and healing through your grief journey.
Shelly Friedlund
Other
August 29, 2021
Showing 1 - 1 of 1 results