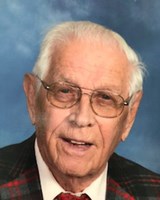 BORN
1927
DIED
2021
FUNERAL HOME
Mount Emblem Cemetery
520 E Grand Ave
Elmhurst, IL
Donald Brening
Born: December 14, 1927
Died: November 15, 2021
Donald Brening, 93, of Mesa, Arizona, passed away peacefully at Acoya Mesa Nursing Home on Monday, November 15, 2021.
Don was born on December 14, 1927, the oldest child of nine, to Helen (Knaack) Brening and Roy Brening Sr. He was raised near Bensenville, IL. on his parents' vegetable farm. He met Dorothy Woerner, the love of his life, at the church in Bensenville, IL, and were married on January 24, 1948. They celebrated 71 years together until Dorothy's passing in September 2019.
Don continued in his father's footsteps by raising vegetables in Arlington Heights, IL. In 1959, they moved to Marengo, IL, and kept raising vegetables, including growing tomatoes for Campbell Soup. Because vegetables were very labor intensive, Don decided to switch over to grain farming. He loved his first combine. Dorothy learned how to run the bigger equipment and was a big help to Don.
Don was the head of the church council in Harmony, IL for many years. He worked on many projects there. He was a family man and did everything he could for his two daughters. Don and Dorothy spent many winters in Arizona in their motor home. Don said he was always having fun there.
They built a new house and machine shed in 1978 not far from their old one. Don spent many hours in his shop cleaning and repairing his machinery. Don and Dorothy spent 30 happy years there.
They retired to Arizona in 2008. Peggy and John Jacobs, their daughter and son-in-law, lived nearby to help when needed. They enjoyed the warm weather and the many activities in their 55+ community. Shuffleboard and cards were Don's favorites.
He was preceded in death by his parents; wife Dorothy; brothers, Roy and Art; brothers-in-law, Ralph VonBergen, Eldon Miller, Elroy Butenschoen and Don Timmermann; grandson-in-law, Lester Batorski; grandson, Jeremy Klock; and son-in-law, Gordon Klock.
He is survived by two daughters, Carolyn Klock of Kirkland, IL. and Peggy Jacobs (John) of Mesa, Arizona; grandchildren, Julie Batorski of Amboy, IL. and Jeff Klock (Paul Achman of Plymouth, MN; great-grandson, Wyatt Klock of Plymouth, MN; brother, Robert Brening; sisters, Betty Butenschoen, Carroll VonBergen, Ellen Miller, Marge Timmermann, and Joan Stoffregen; and sisters-in-law, Carol Brening and Marion Brening.
A memorial service will be held at the St. John United Church of Christ, 11821 East Grant Highway, Hampshire,IL. 60140, on Wednesday, January 12, 2022. Visitation will be from 10:00 A.M. to 11:30 A.M. with the memorial service starting at 11:30 A.M. Burial of the cremated remains will take place at Mount Emblem Cemetery in Elmhurst, IL, at a later date.
Published by The MidWeek News from Jan. 3 to Jan. 8, 2022.
To plant trees in memory, please visit the Sympathy Store.
MEMORIAL EVENTS
Jan
12
Visitation
10:00a.m. - 11:30a.m.
St. John United Church of Christ
11821 East Grant Highway, Hampshire, IL
Jan
12
Memorial service
11:30a.m.
St. John United Church of Christ
11821 East Grant Highway, Hampshire, IL
Funeral services provided by:
Mount Emblem Cemetery
MAKE A DONATION
MEMORIES & CONDOLENCES
Sponsored by Mount Emblem Cemetery.
2 Entries
Don was a very good man and I enjoyed when we all went snowmobiling together. He will be greatly missed. Hugs to his family.
Karen Scherer-Noftz
Friend
January 11, 2022
My sympathy to all the family. Don was such a nice man whenever I saw him.
Julie Stoffregen
January 5, 2022
Showing 1 - 2 of 2 results