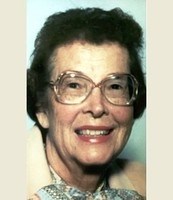 BORN
1922
DIED
2020
FUNERAL HOME
Mishler Funeral Home & Cremation Center
461 W 900 N
Milford, IN
Edna Hollar Barbour
Born: August 8, 1922 in Milford, IN
Died: December 15, 2020 in Whitewater, WI
Edna Hollar Barbour, age 98, of Whitewater, WI, died on December 15, 2020 in Whitewater. Edna Josephine Hollar was born on her family farm in Milford, IN., on August 8, 1922, the daughter of Amos Raymond and Kathryn Josphine (nee Zimmerman) Hollar.
Her marriage with Thomas DeForest Barbour began on August 22, 1948, at Bethel Church of the Brethren in Milford, IN. Tom and Edna met at the University of California Los Angeles. She was his accounting professor, he was a recently returned U.S.A.F. pilot after WWII.
A graduate of Milford High School, Edna earned her Bachelor Degree at Indiana University, Bloomington, Master's Degree at U.C.L.A., and PhD at The Ohio State University, Columbus. She became a Certified Public Accountant while teaching at Northern Illinois University, DeKalb.
As a tenured professor in the College of Business at Northern Illinois University, she wrote a textbook and a teacher's guide on Programming Language 1 (PL1) for college level education. While at NIU she rose through the ranks of Pi Omega Pi, a national business education fraternity, to become President.
Edna always attended and maintained church memberships that included Church of the Brethren, American Baptist and United Methodist denominations. Her favorite scripture was Matthew 11:28 "Come unto me, all ye that labour and are heavy laden, and I will give you rest."
She was proud of her lifelong membership in The Daughters of the American Revolution and a longtime member of the Veterans of Foreign Wars Auxiliary. As a girl she won the State of Indiana Piano Recital competition, then enjoyed a lifelong passion for playing the piano. She enjoyed knitting, needle point, sewing, and cooking, especially for her grandchildren.
Edna and Tom enjoyed many winters at their home in Florida, and became avid golfers in their retirement, once winning the Whitewater Country Club Couples Championship. Summers were spent hosting family gatherings at the home they built with their sons on Whitewater Lake. They were also accomplished bridge players.
Loved survivors include her sons, Dr. Christopher Alexander (Joann) Barbour and Benjamin Hollar (Gwen) Barbour, her grandchildren, Alexis Lynn (Dr. Anthony) Rinella, Matthew Thomas (Nicole) Barbour, Katie Irene (Mike) Rutenbar, and Grace Ann Barbour, and great grandchildren, Marin, Elsie, Joshua, Henry, Emmett, Charlie and Tennyson, niece Dian (George) Loya, nephew, Kevin (Pam) Dwyer, and countless other relatives and friends. She was predeceased by her husband, Tom, on June 17, 1996, sister, Bernice Hollar Dwyer, and her step grandson, John.
The burial and committal service was held in December 2020 at the Hollar Family plots in the Milford Cemetery.
A memorial service will be held at 11:00 a.m. on Saturday, August 7, 2021, at the Mishler Funeral Home & Cremation Center in Milford, IN. Pastor Jim Vandemark, of Bethany Church of the Brethren, Milford, will officiate. A fellowship luncheon will be catered (no need to bring dishes) at the funeral home immediately following the service.
Edna enjoyed volunteering and supporting social causes. In place of other expressions of sympathy, please consider a memorial to Heifer International at heifer.org, or a local Meals on Wheels program of your choice.
Memories and condolences may be shared with the family online at www.mishlerfhcc.com.