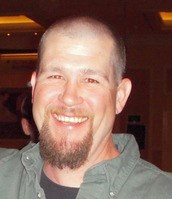 BORN
1969
DIED
2021
FUNERAL HOME
Palm Northwest Mortuary and Cemetery
6701 North Jones Blvd
Las Vegas, NV
UPCOMING SERVICE
Graveside service
Oct, 30 2021
10:00a.m.
Fairview Cemetery
Send Flowers
Paul M. Fleetwood
Born: September 1, 1969 in Jacksonville, FL
Died: August 28, 2021 in Las Vegas, NV
Paul graduated from DeKalb High School in 1987. He then spent four years in the U.S. Navy serving on the USS Enterprise and the USS Abraham Lincoln (Gulf War) aircraft carriers. After his honorable discharge he acquired his CDL license and through his travels decided he loved the desert. He spent three years in Tucson, AZ and ultimately ended up in Las Vegas joining the Plumbers and Pipefitters Union 525. Paul acquired his Nevada Real Estate License in 2019 and also maintained his CDL. Most recently he was working for a freight company helping people move out of California.
Paul loved golf, bowling, cooking, music and karaoke (his friends referred to him as the "30 second DJ"). He was awarded two rings for bowling a 300 game and a 299 game. He loved cooking for our family gatherings, mostly preparing meat in his smoker. Paul's latest challenge was the paddleboard. Paul also loved riding his Harley and experienced many road trips with many friends.
Paul is survived by his wife Shelly, parents Denny & Sue German, sister Julie (Lisa), brother Aaron (Rachelle) and three nephews, Mason, Jaxon and Clemmie. He has many aunts, uncles and cousins in the DeKalb/Sycamore area. Paul was preceded in death by his father, Clifford E. Fleetwood, Jr., his paternal grandparents Clifford Sr. and Laverne Fleetwood, his maternal grandparents Walter (Bob) and Esther Cannon.
Paul will be remembered as a free spirit and will be greatly missed by all his family and friends.
There will be a funeral service with military honors on September 24th from 2:00-4:00pm at Palm Mortuary NW, 6701 N. Jones Blvd. Las Vegas, NV 89131 After cremation Paul will be brought back to DeKalb to be part of the graveyard service with military honors for his Grandpa Walter (Bob) Cannon (who passed away April 17, 2020) on October 30th at 10:00am in the Fairview Cemetery. All family and friends in the area may attend this service. Paul will return to Palm Cemetery in Las Vegas as he loved the desert. In lue of flowers, please consider a donation in Paul's name to: Wounded Warrior Project, P.O. Box 758541, Topeka, KS 66675-8541