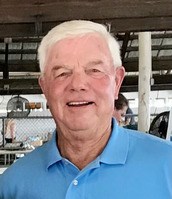 BORN
1946
DIED
2021
FUNERAL HOME
Butala Funeral Home & Crematory - Sycamore
1405 Dekalb Ave
Sycamore, IL
Thomas D. Rhoads
Born: September 5, 1946 in Ladoga, IN
Died: August 31, 2021 in Kingston, IL
Thomas D Rhoads of Kingston, IL died Tuesday, August 31, 2021, at his home.
He was born on September 5, 1946, in Ladoga IN and son of late Donald and Kathryn (Mercer) Rhoads. Tom married Shelley J McClellan on June 23, 1968.
He earned his master's at Purdue University in 1970 and was a member of Alpha Gamma Rho Fraternity. While at Purdue he made friendships that lasted him a lifetime. Tom's hobbies were golfing, hunting and fishing, but he was best known for his love of playing cards with family and friends. When he wasn't playing Poker or Bridge, he would make an occasional trip to the Casino.
Tom was a husband, father, and Grampy. He will be fondly remembered as a great supporter. He took extreme pride in his children and grandchildren. He spent many years on the sidelines of fields and courts, but his favorite spot was the sideline of a 4-H fair.
Tom is survived by wife Shelley Rhoads and children Marisa Robertson (Brandon Robertson), Matthew Rhoads (Jennifer Rhoads), Melinda Alba (Jose Alba); and grandchildren Hana, Abby, Bode, Taylor, Emma, Trevor, Josie, Addie, and JT. Brothers and their spouses, David Rhoads (Sheila Rhoads), Dan Rhoads (Karen Rhoads), Keith Rhoads (Melinda Rhoads), and Gale Rhoads (Kathi Rhoads).
His visitation will be Saturday, September 11th from 1:00 -4:00 PM at the Butala Funeral Home and Crematory, 1405 Dekalb Ave. Sycamore IL 60178.
His burial will be private.
In lieu of flowers, memorials can be made to the DeKalb County 4-H Foundation, 1350 W. Prairie Drive, Sycamore, IL. 60178.
To sign the online guest book or share a special memory, go to www.ButalaFuneralHomes.com

Published by The MidWeek News from Sep. 3 to Sep. 4, 2021.
To plant trees in memory, please visit the Sympathy Store.
MEMORIAL EVENTS
Sep
11
Visitation
1:00p.m. - 4:00p.m.
Butala Funeral Home & Crematory - Sycamore
1405 Dekalb Ave, Sycamore, IL
Funeral services provided by:
Butala Funeral Home & Crematory - Sycamore
MAKE A DONATION
MEMORIES & CONDOLENCES
Sponsored by Butala Funeral Home & Crematory - Sycamore.
16 Entries
Shelley,
So sorry to hear of Tom’s passing. Our deepest sympathies to you and your family.
Luan & Greg Olson
Acquaintance
September 14, 2021
To the Rhodes family my sincere and deepest condolences. Please know I have wonderful lifetime memories of working with Tom as a teenager on the farm 44 years ago. I learned much from him and he was a great teacher. He was patient, hardworking, and brilliant. Tom empowered those that were willing to work. He taught me to operate a front end loader, ride a horse, and work with both cattle and pigs. My favorite memory is sorting cattle on a horse named Apple with both Tom and Russ Schelkopf with huge smiles on their faces telling me “Keep your heels down!” as he galloped off. Lifetime memories-thank you Tom and may you rest in eternal peace.
Joseph Curzon
Coworker
September 12, 2021
Shelly it is with deepest sympathy we extend our condolences to you and your family. Whether it was talking pig talk or discussing the management of the Esmond farm, Tom and I were always on the same page. What a great joy to have had him as a friend for so long. Best of all to you and your family. John and Joanne Huftalin
Shop.comJohn Huftalin
Friend
September 12, 2021
Rhoads family, We were sorry to hear about Tom, our thoughts are with all your family
Bill & Connie Bradley
Bill & Connie Bradley
September 9, 2021
Shelley and family, so sorry to hear of Tom´s passing. He was such a nice man and so dedicated to keeping 4-H in the country strong and growing. I didn´t know he was a fellow Hoosier. My deepest condolences, Shelly
Shelly Friedlund
September 7, 2021
Brother Tom was a stable force in the fraternity
His knowledge and caring for the younger brothers was noted by all
His light mood will be missed by all
Prayers to Shelley and the family in the time of sorrow
Brother Stephen Craig
Stephen Craig
Acquaintance
September 7, 2021
Shelley and family, we are so saddened by your loss. May your fond memories carry you through.
Sue & Steve Appleby
Friend
September 5, 2021
So very sorry Shelley and family. Love and prayers for all of you.
Bev fleming
Friend
September 5, 2021
Shelley. I am so sorry for your loss. Many prayers for you and your family during this difficult time. I’d like to think that he and Russ are together and complaining about the hog market or crops. Much love.
Karen Deverell
Friend
September 3, 2021
TOM was a great classmate, teammate, and fellow Canner. Glad we got to reconnect at our 50th reunion with he and Shelley. He will surely be missed by all his family and friends.
Phillip Seale
Classmate
September 3, 2021
Shelley, I'm so sorry for your loss. Thinking of you and your family during this difficult time.
Tina Weaver
September 3, 2021
Shelly, sorry to hear this about Tom. Our thoughts and prayers are with you and your family. Tom was always friendly to everyone.
jimmie harshbarger
September 3, 2021
Melinda- Your 345 family has you and your family in our thoughts and prayers.
Judy, Maggie, Kristy and Stephanie B., Marisa And Beth SS345
Coworker
September 3, 2021
Shelley, my sincere sympathy to you and your family. He was one of my favorite classmates.
Elda Herbison
Classmate
September 3, 2021
Shelly and family I am so so sorry to hear of Tom’s passing. A great guy. May you be blessed with many wonderful memories.
Debbie (Vice) Lallo
Friend
September 3, 2021
Shelley and family, I’m so sorry for your loss. Tom will be deeply missed by many. May your fond memories get you through this tough time. Love always
Cathy Coffey Newlun
Neighbor
September 2, 2021
Showing 1 - 16 of 16 results