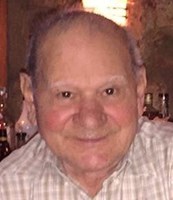 BORN
1933
DIED
2021
FUNERAL HOME
Yurs Funeral Home of Geneva
1771 W. State Street Geneva
Geneva, IL
Vincent Palazzolo
Born: March 5, 1933
Died: September 2, 2021
Vincent Palazzolo, age 88, of Elburn, IL, passed peacefully on September 2nd, 2021 surrounded by his loving family. He was a devoted husband, father, brother and grandfather as well as a strong-faith parishioner of St. Gall's Church.
Vincent's story is a classic American history story. He was born on March 5th, 1933 on the island of Sicily, Italy in a small town named Cinisi. He watched as Patton moved through the island during WWII. However, Vincent had dreams of America. He arrived at Ellis Island with nothing to his name in 1953 and immediately began working at Salerno's Cookies by day and Walgreens soda fountain at night. In 1956 he opened up his first pizzeria located at 4318 W Madison St. In Chicago. In addition to his restaurants, he owned and operated an Ace Hardware in Lombard, IL. from 1969-1974. He returned to Sicily in 1957 to marry the love of his life, Anna. Now with a wife and a family and after owning a string of pizzerias, Vince wanted to move out of the city and raise his family in the quiet area of the suburbs. His strong business sense and work ethic never wavered. He found a restaurant that was for sale named Kendall's Ranch. He purchased it with a handshake deal from the bank and opened Sorrento's Ranch on IL-64 in Maple Park, IL. His motto, "I'd rather make a nickel everyday than a dime to stay open longer.' He did just that. Sorrento's Restaurant has now been open for 47 years with Vince at the helm, working six days a week well into his eighties. Whether behind the bar or conversing with customers at their tables, his ability to connect made all patrons feel like family.
Vincent's businesses weren't his greatest success though. His family was. He cherished Monday night dinners with his family. Yet, his door was always open to anyone who was alone and wanted fun conversation and a warm meal. He enjoyed teaching his family about two of his favorite hobbies: investing in the stock market and horse racing. His love for horse racing was so strong that he owned many horses including his most successful horse, Fort Bent ("he's no slouch"). In his later years, he enjoyed retreating to his home in Cape Coral, FL to be around friends and family or take a cruise with his wife and friends.
He is survived by his wife of 64 years, Anna, nee Talluto, his children, Josephine (John) Richards, Frank (Sherry) Palazzolo, Lina (Ed Slattery) Royer, Anita (Kevin) Nenonen, Christina (Daniel) Marotta, his brother Mario, 10 grandchildren, six great grandchildren and many nieces and nephews. He was preceded in death by his parents Francesco and Giuseppina Palazzolo, seven siblings, grandson Michael Joseph Palazzolo and grandson Tyler Bennett Royer.
Visitation will be held at Yurs Funeral Home 1771 W. State Street, Geneva, IL 60134,(Rte 38) on Monday, September 6th from 3 pm - 7 pm. Funeral mass will be held at St. Gall's Catholic Church in Elburn, IL on Tuesday, September 7th at 11 am. Entombment will be held at All Saints Cemetery in Des Plaines, IL immediately following the mass. In lieu of flowers, contributions can be made to St. Jude Children's Research Hospital or to the American Heart Association.
For more information, please call Yurs Funeral Home of Geneva, 630-232-7337 or visit us at www.yursfuneralhomes.com

Published by The MidWeek News from Sep. 6 to Sep. 7, 2021.
To plant trees in memory, please visit the Sympathy Store.
MEMORIAL EVENTS
Sep
6
Visitation
3:00p.m. - 7:00p.m.
Yurs Funeral Home of Geneva
1771 W. State Street Geneva, Geneva, IL
Sep
7
Funeral Mass
11:00a.m.
St. Gall's Catholic Church
Elburn, IL
Sep
7
Entombment
All Saints Cemetery
Des Plaines, IL
Funeral services provided by:
Yurs Funeral Home of Geneva
MAKE A DONATION
Please consider a donation as requested by the family.
MEMORIES & CONDOLENCES
Sponsored by Yurs Funeral Home of Geneva.
6 Entries
VINCE WAS ONE OF A KIND. ENJOYED SO MANY CONVERSATIONS WITH VINCE AT HIS BAR AND MY SINCERE CONDOLENCES TO FRANKIE AND SHERRY. HE ALWAYS BROUGHT A SMILE TO MY FACE!
BUD WEINSTOCK
Friend
September 15, 2021
As soon as Sorrento´s opened, my late husband and I had "our table" every Friday night. We love you, Anita, and we particularly valued Vince, who always made us feel welcomed and special. My condolences go to Mrs. Palazzola, to Anita and Frank, and to all the other children and their families.
Sue Doederlein
Friend
September 8, 2021
May your memories of the wonderful times you shared with your loved one comfort you and your family, today and always.
American Heart Association
September 7, 2021
My condolences to the Palazzolo family. Vince was always great to my family and myself. I enjoyed seeing him and speaking to him, he always had a nice word to say. Vince will truly be missed.
Bob Treadwell
Friend
September 6, 2021
My sincere condolences to the entire family. I will miss his presence at the restaurant.
Bob Kleeman
Other
September 5, 2021
Sincere sympathy to Lena , Ryan and Palazzolo families. May his gentle soul rest in peace.
Gerard, Mary &Mark Buckley , Tarbert, Ireland
September 5, 2021
Showing 1 - 6 of 6 results