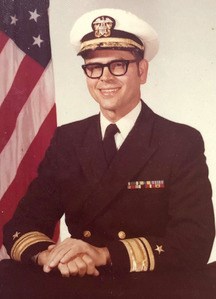 BORN
1926
DIED
2021
FUNERAL HOME
Money and King Funeral Home
171 Maple Avenue W
Vienna, VA
Cabell Seal Davis Jr., Rear Admiral, USN (Retired) of Vienna, VA passed away peacefully at Walter Reed Military Hospital, Bethesda, MD on Monday, August 9. He was born in Lakeland, Florida to Cabell S. Davis and Elizabeth Massie Davis and grew up in Charleston, WV. He graduated valedictorian of Charleston High School in 1944 and attended the U.S. Naval Academy (Class 1948) and Naval Postgraduate School (MSc Mech Engineering). He initially served as a line officer on naval warships and then served as a career Engineering Duty Officer. He was promoted to Rear Admiral in 1975 and served as Commander of Charleston Naval Shipyard, S.C. Admiral Davis was responsible for introducing the first multi-purpose amphibious warship into the fleet, delivering 5 ships of the LHA class to the Navy, forming the backbone of the then modern-day Navy Amphibious Force. As Shipyard Commander, he increased the overhaul performance from the worst to the best of the then eight naval shipyards. During his last year active duty, he oversaw all 8 naval shipyards and all 16 Supervisors of Shipbuilding offices. He also caused a new and vigorous program to be developed in the area of industrial health and safety. Admiral Davis retired in 1979. His awards included Legion of Merit and Navy Commendation Medal along with service medals dating from WWII. He wore the Surface Warfare Officers pin. In addition to his distinguished professional accomplishments, he will be remembered as a warm and loving family man and a truly kind and gentle soul. He is survived by his wife of 73 years, Libby (Elizabeth Holliday), son Cabell, son Stephen, daughter Carol, 2 daughters-in-law, 4 grandchildren, and 5 greatgrandchildren. A graveside service with full military honors will be held at Arlington National Cemetery next spring. Memorial contributions can be made to the Navy Memorial.