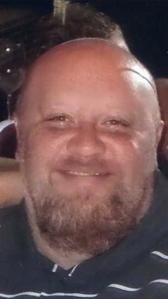 Chris was born in Santa Monica CA, lived in Inglewood CA and grew up in the Bay area. He served in the Navy 1990-1992 Pearl Harbor Hawaii then moved to Las Vegas, NV.

No matter where Chris lived he certainly made plenty of friends. He was a kind, polite, jovial and fun loving person.

Chris had worked in a number of fields in addition to serving in the Navy. Such as security, DJ, auto styling and truck driver. No matter which hat Chris wore he always wore it with pride.

Warmly known as "Big Chris" and not just because of his big stature. Chris had a big personality, a big laugh and a big heart.

If anyone had a need Chris was there to fill it, often putting others in front of himself. He was someone we all counted on and could trust to the utmost.

Chris enjoyed gatherings, barbeques, family and friends. He loved the ocean, good steak dinners, football and dogs (especially his dog Wolfie). His love for the Pittsburgh Steelers was unsurpassed!

He had always been interested in customizing cars starting at a very young age which led him to find employment at KAO Auto Styling in Las Vegas, NV. Chris was a valued employee for many years and became part of their family. He was an important component at the SEMA Show Convention for KAO excelling at customization and vehicle coordination for the booths. He was in charge of public relations and developed long lasting friendships with the manufacturers of specialty equipment products. He was well respected, loved by all and will be missed. a giant void is felt by us and surely everyone who had a connection with him.

Chris was truly one of a kind and it has been an honor to have been his friend, employer, family member or any part of his life.

Whether you had met him once or were fortunate enough to know him well, these words would ring true: "What a great guy!"

Until we meet again

We think about you often

We talk about you still

You have never been forgotten

And you never will

We hold you close within our hearts

And there you will remain

To walk and guide us through our lives

Until we meet again

In lieu of flowers the family kindly asks that a memorial donation be made in Christopher's name to K9's For Warriors.

Pleas join us in honoring Chris

Published by MilitaryTimes.com on Sep. 10, 2021.
To plant trees in memory, please visit the Sympathy Store.
MEMORIAL EVENTS
Oct
8
Memorial Gathering
12:30p.m.
Southern Nevada Veterans Memorial Cemetery
1900 Veterans Memorial Dr., Boulder City, VA
MAKE A DONATION
MEMORIES & CONDOLENCES
1 Entry
I cannot begin to say how much I miss Big Chris. Just watching football tonight has been heart wrenching. He called me every week during football season to raz me about my team and tout his Steelers! He was like a brother to me and I did not realize how important he was until he was gone. My heart is broken and there is so much unsaid. There are very few people that come into our lives that we can welcome into our homes and into our family that we can trust unconditionally. Chris was the rare exception. My advice to myself and to others is to cherish every moment of these special people.
Nancy Cardella
September 10, 2021
Showing 1 - 1 of 1 results