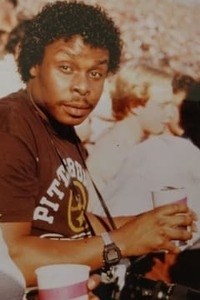 It is with great sadness that I must announce that our Brother and loved one Darrell Merriweather has reached the end of his journey on the rough and rugged road and has secured a much smoother path as he is Asleep with God our Lord and Savior Jesus Christ. 1Thessalonians 4:14

Many of you may remember Darrell as One who lived life to the fullest and who was indeed an adventurous soul. He simply enjoyed people from all walks of life, visiting with them and loved

being the center of attention. Darrell was the first and oldest child born to Navy Chief John Merriweather and Alma

Darrell has 3 brothers Leonard, Michael (Sandra Merriweather), David (Asleep in Christ Jesus) and 2 sisters Ye'von Merriweather Chester and Audrey Merriweather. Darrell was born in San Diego California. He was raised in a Navy Family that constantly

Darrell was quite a character and quite a Ladies man and fashioned himself to a young Billy Dee whom he looked like and favored. Michael said " I can still picture cruising Vallejo with Darrell as he was taking or picking me up from practice in his 1972 Buick Wildcat listening and blasting Funkadelic on the 8 track with his Godfather brim on with Darrell smoking on his Tip-O-rillos

Growing up, Darrell was a pretty good athlete and was admired by many. He had a love and a knack for all sports but played and excelled in baseball and football particularly. Darrell being an

left handed pitcher, was a terror on the mound. Darrell was graduate of Hogan High school in Vallejo California where he starred on the Hogan Spartans football team. Darrell was often in the paper for sports and I would keep the clipping of him in my wallet. "See" I would tell everyone pulling out the newspaper clipping "that's my Big Brother!!" Michael said.

baseball, basketball and football with him and his friends despite the huge age difference. Because of Darrell's mentorship Michael went on to play 11 years in the NFL as a top defender.

After graduating high school Darrell decided to follow his father's Navy Chief John Merriweather path and enlisted in the Navy. Darrell was quickly promoted Unit Squad Leader and earning a extra stripe in charge of 125 men at Point Loma Navy base in San Diego, California. Darrell served proudly in the Navy as a Electrical Workman working on military aircraft and

civilian work for a 2 1/2 years until his Honorable Discharge. Darrell's Tours of Duty were in Millington, Tennessee, Barber Point, Hawaii, dropping off marines in the Middle East and Norfolk, Virginia. Later Darrell used the GI Bill to earned his BS in Business Administration from San Diego State in 1981.

While still as a Naval Reservist, Darrell worked for numerous Fortune 500 companies in the Financial sector including John Hancock Financial Company and Prudential after years with A.L

Darrell was also an accomplished drummer from a young age which he kept the passion going by playing the Bongos despite the loss of the use of his legs caused by a escalator accident. Despite

being wheel chair bound he was still able to live a short but colorful life.

Darrell loved the West Coast and lived in San Diego, San Francisco and Vallejo but he loved Seattle, Washington because of the mild weather and closeness to his favorite Aunt, Auntie Leslie and

her beautiful family there.

In closing, Darrell was a loving, energetic, opinioned, man with a strong demeanor that despite his personal struggles he knew where His strength and salvation came from and trusted in

the Lord Jesus during his latter days. He loved going to his Church 1st AME in Seattle where Pastor Carey Anderson presided when weather permitted and transportation was available.

Darrell was a Foodie and he really loved and appreciated good home cooked meals especially from his mom Alma Merriweather and girlfriend Karen Renfro.

Darrell being raised in the Bay Area, he really loved all the Bay area sports teams Giants, A's and Forty Niners. Michael said "It was my brother Darrell that took me to my very first NFL game at Candle Stick in San Francisco where we saw then SF Forty Niner Running Back OJ Simpson play some of his last games." Darrell liked the Steelers by default of course but it was the

In closing, Darrell was a fantastic Big brother, an awesome relative to scores of loving cousins, nephews, nieces, aunts and uncles and a Friend to all! We all will miss Darrell's hardy laugh,

corny storytelling and his genuine warm smile that lit up any room he entered. Michael said again" I am personally going miss that every weekend getting a call from Darrell where He would always say " MM Man what u say what u say MM Man" and we start

talking about what going on in this crazy world or about a football game or NBA Basketball game! Or we will talk about Food and I will ease in the conversation there about God and health

tips till he says Ooh time for me to get off the phone with a big laugh. Really going to miss that time Big Brother Darrell Merriweather!"

To Thee My Dear Brother Sleep well till we see you in Heaven ...... We Love you always and you will deeply be Missed you here Earthly! Thank you Darrell for your Service!!!

Published by MilitaryTimes.com on Oct. 9, 2021.
To plant trees in memory, please visit the Sympathy Store.
MEMORIAL EVENTS
To offer your sympathy during this difficult time, you can now have memorial trees planted in a National Forest in memory of your loved one.
MAKE A DONATION
MEMORIES & CONDOLENCES
1 Entry
We are sorry to hear of Darrell's passing. With deepest sympathy to the Merriweather Family. Michael, your reflections of your big brother were lovingly wonderful and brought back memories we had of our high school and partying days at Hogan High School, Class of 1972. Rest now Darrell. (Anthony Widemon, aka Weed, aka Twinkles, aka King Size)
Anthony and Robyn Jackson Widemon
November 9, 2021
Showing 1 - 1 of 1 results