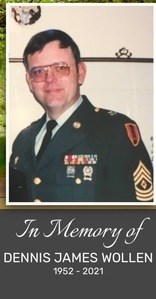 Funeral services will be held at Arlington National Cemetery at a later date. However, the family will host a Celebration of Life on Saturday, September 11, 2021, between the hours of 1-4 p.m. Please contact a member of the family for details and location.

Dennis was born in Port Huron, MI to Jack T. Wollen and Elizabeth J. Fuller on March 19, 1952. He went to Mt. Clemons High School and graduated in 1970. He joined the U.S. Army in June 1970 and, after 24 years of honorable service to his country, retired from the U.S. Army Signal Corps and settled in Augusta, GA. In 1994, he went on to work for Racetrac Petroleum as an Area Supervisor. After 11 years with Racetrac, he joined the U.S. Department of State, where he worked as an Authentications Specialist. He served with the Department of State for 9 years in the Bureau of Consular Affairs. After Dennis retired from the Army, he earned a B.S. in Human Resources Management in 2011 from DeVry University. Dennis enjoyed buying and working on cars, watching historical documentaries, and music—especially the oldies. He also loved long drives, sharing his experiences in the military, and living overseas. Of all the things he loved to talk about, he loved talking about his grandchildren most of all. He was very proud of them and even prouder when they joined the military themselves. Always a barrel of fun, Dennis was the family and office comedian who always knew how to lighten the mood.

Dennis was a loving husband, father, and grandfather and bravely fought cancer until the very end. Known for being the office historian and 'fixer' of all things, Dennis enjoyed sharing his wisdom and knowledge with family, friends, and coworkers. He liked to make sure he had his facts straight because he always had to be right. Dennis always had an ear for you and a commonsense approach to your problems. Dennis really looked forward to meeting his first great-grandchild. Once he learned he was going to be a great-grandfather, he predicted it would be a girl. While Dennis didn't get to meet his great-grandchild, she arrived only hours after he took his final breath—proving again, he was right.

Memorial donations may be made to Fisher House Foundation (Fisherhouse.org). The family wishes to extend their gratitude to everyone who has supported Dennis throughout his battle with cancer.

Published by MilitaryTimes.com on Sep. 4, 2021.
To plant trees in memory, please visit the Sympathy Store.
MEMORIAL EVENTS
Sep
11
Celebration of Life
1:00p.m. - 4:00p.m.
VA
MAKE A DONATION
MEMORIES & CONDOLENCES
0 Entries
Be the first to post a memory or condolences.