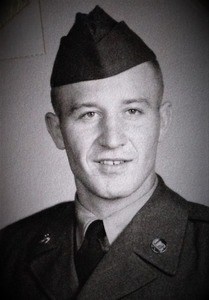 Born in Stanton, Nebraska, February 8, 1935 (in a chicken coop during a blizzard is what he told his daughters), Don graduated from Stanton High and landed a job as cub reporter at the Stanton Register. From there, he attended the University of Nebraska (GO HUSKERS!), studying journalism and lettering in baseball, and was then hired by the Fremont Tribune.

Don served in the US Army (1956-1958), stationed as a radio operator in Fulda, Germany, in Headquarters Battalion of the 14th Armored Cavalry Regiment.

He was Editor-in-Chief at the Green Sheet/Murray Eagle newspaper in Murray, Utah, 1965 to 1984, and subsequently copy editor at the Salt Lake Tribune and Deseret News.

Don's love of words manifested most often in puns, crossword solving, and love of word play. His favorite piece of advice: "When you assume, you make an ass out of u and me."

In his own words:

"I earned only a Pfc. stripe in the Army, was inducted at Camp Chaffee, Arkansas, served basic training at Fort Carson, Colorado, then nearly six months of advanced basic in high speed radio classes at The Southeastern Signal School (we called it Tessie Tech), just outside Augusta, Georgia -- January through June, 1957. In July, we boarded a train for New York, where we boarded the USS Randall for an enjoyable nine-day cruise that took us up the English Channel to the port of Bremerhaven, Germany. A train took us to central Germany to Fulda, in the state of Hesse, where I was stationed the next 15 months. I had regular shifts as radio operator, using mostly a telegraph key (Morse Code) to communicate with troops patrolling the border with East Germany, when the country was still separated between East and West. I was in Headquarters and Headquarters Battalion of the 14th Armored Cavalry Regiment. From our barracks, we could see the mountains that divided East Germany from West Germany. It was often said that if World War Three were to start, it would likely be in what was called the Fulda Gap of those mountains."

Published by MilitaryTimes.com on Sep. 28, 2021.
To plant trees in memory, please visit the Sympathy Store.
MEMORIAL EVENTS
To offer your sympathy during this difficult time, you can now have memorial trees planted in a National Forest in memory of your loved one.
Funeral services provided by:
Affordable Funerals and Cremations - Salt Lake City location
MAKE A DONATION
MEMORIES & CONDOLENCES
Sponsored by Affordable Funerals and Cremations - Salt Lake City location.
3 Entries
My deepest sympathies to Betty and family. I haven't seen Don for several years, but during his time at the Green Sheet, and then with the Deseret News and Tribune, we maintained a close relationship. I was proud to call him 'friend' and we enjoyed many times just talking.
Bill Barton
September 29, 2021
I´m so sorry to hear of Don´s passing. I was fortunate to work with him at both papers, and his kindness, generosity and love of words made a deep impression on me. I appreciated his wit and wisdom. He shared his love of music by making me a dozen CDs with great old tunes. Like the music that he loved, his influence will live on. He made me a better copy editor and a better person.
Barbara Gingery
Work
September 26, 2021
I'm so incredibly saddened to see Don's obituary. He was like a second father to me, a perfect boss for a young man entering the newspaper business and a dear friend throughout my life. He was so kind and compassionate, a wordsmith through and through, simply one of the most important guiding forces in my life. I tried to track him down after your house sold but couldn't find him to tell him I'm still thinking of him often. For all the members of the Robinson family, just know your dad and husband was, and will continue to be, revered by me. Go Nebraska!
Mike Gorrell
Friend
September 25, 2021
Showing 1 - 3 of 3 results