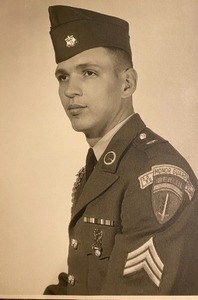 Frank, a through and through Yankee, lived more than half of his life in the South. Standing at 6'3, he may have come across to some as intimidating and stern but underneath that exterior he was a fiercely proud and jovial man. He was proud of the accomplishments of his children; proud of his military roots and in turn of his own military career which began when he enlisted at 17; proud of the legacy of his life, including serving in the Honor Guard at the Tomb of the Unknown Soldier and the White House; and the many adventures of his youth, much of which was spent abroad in Europe. He loved to tell stories, and these became much more forthright and elaborate in his later years. He came alive as he described the many antics and pranks of his youth and the valor of piloting a helicopter during Vietnam. He often requested for unsuspecting nurses and doctors call him "Magnet Ass" due to the nickname he received for the numerous hits his aircraft received during missions in Vietnam. Along with this nickname, he received many honors and commendations, including The Bronze Star Medal (1st OLC), Air Medal 30 Award, Army Commendation Medal 2 0/S, Vietnam Cross of Gallantry with Palm, Expert Infantryman Badge, Helicopter Pilot Master Aviator Badge, and many others. He was awarded the Purple Heart after being shot down and wounded during one of these heroic missions. After his service in Vietnam, he completed a bachelor's degree at the University of Central Florida. He then reenlisted and continued to serve our country through the National Guard, Army Reserves, Civil Air Patrol and later as a Civil Servant at Fort Benning, Georgia.

Along with this legacy of service he also leaves behind a legacy of family. The brother to 11 siblings, this father of 3 passed on his characteristic sense of pride to his family along with a fierce determination, strength, and resilience. His legacy will continue to live as we share his many adventures and stories and, through the traits that have been passed down to his children and grandchildren.

A memorial will be held 10:30 October 9th at Brett Funeral Home 4810 Central Ave. St. Petersburg, Florida with family visitation beginning at 10:00. Major Francis E. Kalakauskis will be laid to rest with honors at Arlington National Cemetery in Arlington, Virginia in the New Year.