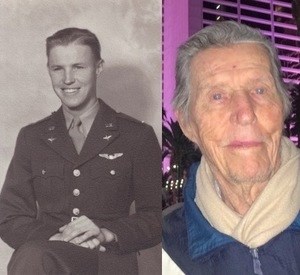 BORN
1923
DIED
2021
Harry J. Crozier, age 98, passed away at a hospital in Long Beach, CA on August 21, 2021. Harry was born in Phoenix, Arizona to Lige Murrie Crozier and Mary Josephine Engstrom. He and his older brother Albert were raised by Lige and Florence Crozier. Harry did many different jobs in his early life, including newspaper delivery, bell hop, carpenter, and riveter.

A month before graduating high school, he joined the US Army Air Force. After pilot training in Sebring, Florida he served as a B-17 pilot in the European theater of WWII. His first mission was over Normandy, France on D-Day in 1944. In total, he flew 36 missions in WWII with the 303rd bomb group, 359th bomb squadron based out of Molesworth, England.

After his service in WWII, he married Kathryn Richardson in Phoenix, Arizona in 1944, with whom he had one child, daughter Kathy. Harry and Kathryn later divorced.

Harry spent a few years outside of the military after the war to earn both his Bachelor's and Master's degrees at Arizona State University, before returning to the US Air Force. He served for 33 years, including as an Air Force ROTC pilot instructor in Queens College (NY), a personnel officer in the Korean war, and a transport pilot in the Vietnam war. He flew the last transport plane carrying out Vietnamese refugees at the end of the war, before retiring honorably in 1975 as a lieutenant colonel.

Throughout his USAF career, Lt. Col. Crozier earned many commendations including the Airman's Medal and Distinguished Flying Cross. He had the honor of flying a transport mission carrying then Senate Majority Leader Lyndon B. Johnson and then Speaker of the House Sam Rayburn. Lt. Col. Crozier flew the following planes during his storied career: PT19, B215, UC78, B17, L4, AT6, L5, C45, T6, C47, OA10, B25, KC97, KC135 (707), and C130.

During his last years as a USAF pilot working out of Taiwan he met his second wife, Mei. They wed in 1976 before moving to Honolulu, Hawaii. Harry and Mei had one child, son Harris. Harry shared a long 45-year marriage with Mei. They moved from Hawaii to Leisure World retirement community in Seal Beach, CA where they've been for the past decade to be closer to their son, who completed college at UCLA.

Throughout his life, Harry loved reading at the library, watching/riding trains, and keeping interests in history, aviation, and finance. He had a kind, calm, and friendly demeanor with a persistent sense of humor that made him instantly likeable by all who met him.

Harry was a loving and irreplaceable husband and father. He is survived by his wife, two children, three grandchildren, and two great-grandchildren. His final resting place is the columbarium at Los Angeles National Cemetery. He is forever loved and at peace.

Published by MilitaryTimes.com on Aug. 29, 2021.
To plant trees in memory, please visit the Sympathy Store.
MEMORIAL EVENTS
To offer your sympathy during this difficult time, you can now have memorial trees planted in a National Forest in memory of your loved one.
MAKE A DONATION
MEMORIES & CONDOLENCES
1 Entry
Harry was a frequent visitor for many years at the library in Leisure World. He had a voracious appetite for knowledge. I know he is beloved by his family and we miss his presence here at the library already.
Taylor
Other
September 3, 2021
Showing 1 - 1 of 1 results