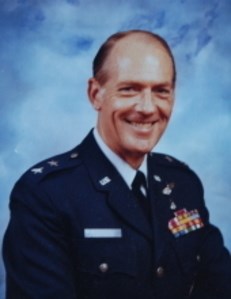 Jack's parents were John and Annie Claire Ord. He was the oldest of three children raised in Baker, Oregon and he held his twin brother and sister in the highest regard. Jack's stories of mischievous childhood adventures always had us in stitches, one of his favorites being his senior prank which proved that cows can walk upstairs but can't walk down.

Today we take great care to honor a life lived with greatest purpose and passion.

General John Ord's military accomplishments were significant. He began his military career as a member of the US Navy from 1942-1947. General Ord returned to active military duty in 1953, completing his residency in internal medicine, specializing in cardiology. From 1957 to 1966, he served as Chief of Cardiovascular Renal Services in Wilford Hall USAF Medical Center and established the first complete U.S. Air Force cardiopulmonary physiological laboratory and directed the first Air Force open heart surgery program.

In January 1966, General Ord transferred to the Aerospace Medical Division at Brooks Air Force Base where he served as medical flight controller on the Gemini and Apollo space missions and coordinated medical research to support manned space flight programs. From July 1972 to June 1974, General Ord commanded the Air Force hospital at Clark Air Base in the Philippines and directed the medical planning of Operation Homecoming. General Ord was appointed Director of Medical Inspection at Norton Air Force Base in 1976 and promoted to Command Surgeon for the U.S. Air Forces in Europe.

General Ord was promoted to Major General December 19, 1979. In February 1980 he became commander of the Air Force Systems Command's Aerospace Medical Division at Brooks Air Force Base. General Ord retired from active military duty at Offutt Air Force Base on November 30, 1985, with the highest medical military decorations and awards for his distinguished service.

Well known and honored for his military, aerospace and medical field accomplishments, many do not realize his passionate love for nature and the arts. When not in uniform, Jack could be found on the golf course, behind the lens of his camera or travelling to remote areas to hike, camp, and explore nature. He was an accomplished saxophone player in his younger years, playing with Glenn Miller's nephew. Jack's appreciation and love for music was inherited from his mother. Classical, jazz and big band music resonated throughout their home always.

Jack held a deep respect and love for his and Sandra's blended family. Opa had a unique way of engaging his grandchildren early on with the riotous adventures of Bad Dog. He challenged us all to push boundaries in thought and accomplishments. His quiet strength, willingness to support, and share honest perspective was a gift through the years and will be greatly missed.

We can't think of a better representation of greatness than someone who dares to be themselves.
Published by MilitaryTimes.com on Sep. 27, 2021.
To plant trees in memory, please visit the Sympathy Store.
MEMORIAL EVENTS
To offer your sympathy during this difficult time, you can now have memorial trees planted in a National Forest in memory of your loved one.
Funeral services provided by:
Porter Loring Mortuary North
MAKE A DONATION
MEMORIES & CONDOLENCES
Sponsored by Porter Loring Mortuary North.
0 Entries
Be the first to post a memory or condolences.