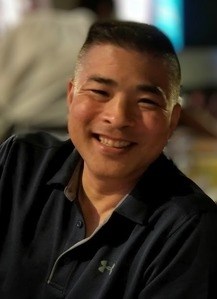 BORN
1967
DIED
2021
Karl Richard Inouye passed away after a long battle with cancer on September 5th, 2021 at the age of 54, surrounded by family at home in Encino, California. Karl was known as a natural leader, mentor, a devoted husband, father, brother, son and valued friend. Born in Caldwell, Idaho to Kris and Carol Inouye, he grew up on the family farm and studied Judo from the club founded by his grandfather Masao Yamashita, the Boise Valley Judo Club, and also at Idaho State University. He graduated from Wilder high school. He was on the football, baseball, and basketball teams as well as playing in the school band. His school was so small that he would remove his shoulder pads at halftime of football games and run up to play his trombone in the band and then run back to get his pads on to play again. He was that kind of person, going all out for the things he was committed to doing and helping out whenever someone needed him.

Karl was in the Army from 1987- 1991, serving in Panama, Fort Lewis, the DMZ, Aschaffenburg, Germany, and he fought in the first Gulf War. During his military service he helped fight the Yellowstone fires of 1988 which collectively formed the largest wildfire in the recorded history of the National Park.

As an IT consultant, his clients and colleagues admired his work ethic, values, integrity and inclusiveness. He had a passion for Star Trek and was thrilled in 2016 to meet and talk to actor George Takei whose character Lt. Sulu had a great impact on Karl as a child. He loved the outdoors, especially fishing, and developed a love of the arts through the family into which he married. His greatest joy in life was the love he had for family, his wife Tarumi, his daughters Jacqi and Sara, his family of origin, and close friends who were like brothers to him. Known for his wit and his generous nature, Karl's memory will live in the hearts of all who knew him.

Karl is survived by his wife,Tarumi, his children Jacqi and Sara, his parents Carol and Kris, and his sister Dr. Lisa Inouye and brother-in-law Dr. Mike Graff and their children Elizabeth and Richard.

"Of all the souls I have encountered in my travels, his was the most Human." Karl, you will be sorely missed as you travel to the second star to the right and straight on 'til morning.

May we Live Long and Prosper with memories of Karl in our hearts.

Published by MilitaryTimes.com on Oct. 4, 2021.
To plant trees in memory, please visit the Sympathy Store.
MEMORIAL EVENTS
To offer your sympathy during this difficult time, you can now have memorial trees planted in a National Forest in memory of your loved one.
MAKE A DONATION
MEMORIES & CONDOLENCES
3 Entries
I'm so sorry to hear of Karl's passing Carol and Kris. Do know you are in my prayers. I'll always remember the fun we had bowling and you sharing his baby clothes with me.
Patty(Boehner) Pennington
October 9, 2021
You were a wonderful husband, father and human. I remember you as always willing to pitch in and help with the dance studio in any way you could. I know that there are many people - including me - who will not forget you.
SUSAN PINTAR
Friend
October 4, 2021
Karl was a big brother to me. I´ve learned so much from him over the years. He taught me about business, our Japanese American culture, and what true friendship is about. I will always treasure our time we had, and keep our great memories
Ty Morita
October 4, 2021
Showing 1 - 3 of 3 results