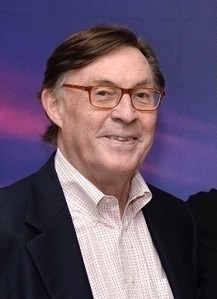 BORN
1947
DIED
2021
FUNERAL HOME
Roper and Sons
4300 O Street
Lincoln, NE
Michael Dean Naeve, 74, of Lincoln, NE, died 9/27/21 in Lincoln. Michael was born 3/4/47 in Kenosha, WI to Donald and Lila (Porter) Naeve. His family moved to Ord, NE, shortly after, where Michael grew up. He graduated from University of Nebraska-Lincoln in 1969 and completed his MBA from the Graduate School of Business at Stanford in 1975. Michael served in the Army from 1969-1973, with the rank of Captain. He lived in the San Francisco Bay Area from 1971-2000, returning in 2013 to accept a position as an auditor with the Federal Bureau of Investigation in San Francisco. He retired in November of 2020 and relocated to Lincoln in May 2021. Michael's daughters fondly recall his love of music, from classical to 1960s/1970s rock. He played several instruments, including guitar, trumpet, and trombone. He was an avid golfer for many years, and enjoyed writing creative fiction.

Survivors include: Daughters, Alexandra and Rebecca; brother, Jim and his niece, Jamie.

He was preceded in death by his parents, his first wife, Sheryl (Bresley) Naeve, and his brothers, Bob and Bill.

Cremation, no visitation, services at later date.
Published by MilitaryTimes.com on Oct. 3, 2021.
To plant trees in memory, please visit the Sympathy Store.
MEMORIAL EVENTS
To offer your sympathy during this difficult time, you can now have memorial trees planted in a National Forest in memory of your loved one.
Funeral services provided by:
Roper and Sons
MAKE A DONATION
MEMORIES & CONDOLENCES
Sponsored by Roper and Sons.
0 Entries
Be the first to post a memory or condolences.