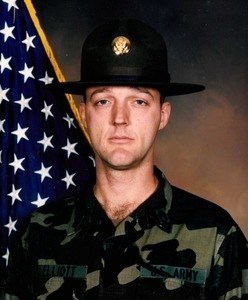 Roger was born in Jacksonville, FL and was raised working tobacco fields in Pamplico, SC. He spent his career in the U.S. Army serving as a Medic, Ward Master, and Drill Sergeant, working at Walter Reed Army Medical Center, Washington D.C., The Academy of Health Sciences in San Antonio, Blanchfield Army Community Hospital, Fort Campbell, KY. Homeschooling the children they had a three-year school fieldtrip in Germany, while Roger was stationed at Badkreuznach working as a Senior NCO Administrator and Trainer. Roger loved the Army. His service continued after death, as he is a tissue donor for a V.A. ALS study in Boston.

Roger retired to Wisconsin, and he greatly treasured his extended Wisconsin family and his adopted state. He remodeled the Martin family homestead farmhouse during his retirement. Roger was a music lover and enjoyed Volksmarching (hiking,) running, and was an avid bicyclist. It was not unusual for him to bike 100 miles in a weekend. He sold some of his beloved L.P. record collection to buy a jogging stroller, "bike trailer" to share his passion with his children when they were small. Roger was a member of the Edgar VFW and American Legion Post 10, Wausau.

Roger was also very interested in vehicle maintenance and had many other hobbies, and he was very fond of the family pets.

Roger is survived by his wife, Roberta Martin Elliott of Wausau; two children, Troy Elliott and Erin Iris Elliott-Stall (Adam) all of Stevens Point; brothers Anthony of Virginia and Jerry (Veronica) of South Carolina. He is further survived by brothers-in-law Fulton (Susan) and Ward of San Diego; Peter of Chicago; Xavier (Mary) and Michael (Janie) all of Edgar and one sister-in-law, Bernadette Martin (Ken Dolphin) of Iowa.

He is further survived by some very special people in his life, Bobbi Jean Smith; David Blackwell and Cherry Blackwell; and Candace Rose Elliott Brown. He is also survived by many nieces and nephews, and friends in many parts of the United States.

Roger was preceded in death by a daughter, Ella Jean Elliott; his parents; his parents in-law; and a brother-in-law, Marty Martin.

The family wishes to acknowledge and thank Tia Bonilla for her two years of dedicated service helping Roberta and Roger. Dedicated Staff at King and the caring Hospice Staff of Theda Care at Home were so much appreciated.

A Mass of Christian Burial will be 11am Friday, August 13, 2021, at Holy Name of Jesus Parish, 1104 S. 9th Avenue, Wausau. Rev. Sam Martin and Fr. Al Sloviak will con-celebrate. Visitation will be from 9am until the time of service, all at the church. Burial will be at St. Patrick's Cemetery, Halder. Beste Funeral Home is assisting the family with arrangements. Online condolences can be directed to the family at www.bestefh.com.