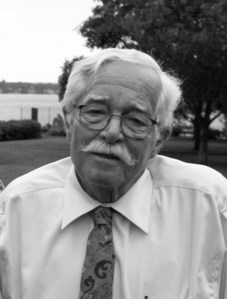 Roswell G. Hall III, 80, of Storrs, CT, died Tuesday, September 21, 2021. He was born in Boston to the late Roswell G. Hall Jr. and Harriet K. Hall. He grew up in Weymouth, MA, and spent many memorable summers with his family in Chatham on Cape Cod, a place he loved all his life.

Ros earned his degree in aeronautical engineering at Boston University. While in Boston he met the love of his life, Gretchen L. Ott, whom he married May 31, 1968. After the births of their daughters the couple moved to Storrs, where they lived for 43 years in the house that Ros helped to design and build, and continued to improve as long as he was able. A consummate engineer and handyman, he loved to tinker in his workroom and garage. He could take a car apart and put it back together and perform complex math in his head, to the amazement of his family.

Ros lived for everyone around him. A proud veteran of the US Air Force, he served during the Vietnam War in the 602d Fighter Squadron (Commando) at Udorn Royal Thai Air Force Base. In Storrs (Mansfield), he was a longtime member of the Planning and Zoning Commission, the Lions Club, and First Church of Christ, and was a volunteer tax preparer at the Senior Center. He helped anyone who needed it and was generous with his advice, time, and mechanical know-how. A patient teacher, he made sure his daughters could swing a hammer and change a tire, make buckwheat pancakes, and become good humans.

Ros found delight in just about everything, especially life's absurdities. A gifted storyteller, he could spin a good yarn from his life's many adventures and his daily commute. His was a subtle humor, but if you got him going he'd laugh until he cried. Best of all he loved time with friends and family. His positive outlook through multiple illnesses and surgeries inspired everyone who knew him. Ros was quiet yet steady, and selfless to the end.

He is survived by his wife of 53 years, Gretchen; daughter Phoebe and husband Peter; daughter Rebecca and husband Andrew; sister and brother-in-law Deborah and George Little; nieces and nephews; and many, many dear friends. Services will be private. Donations in his memory may be made to Lions Clubs International and First Church of Christ in Mansfield.

Published by MilitaryTimes.com on Oct. 1, 2021.
To plant trees in memory, please visit the Sympathy Store.
MEMORIAL EVENTS
To offer your sympathy during this difficult time, you can now have memorial trees planted in a National Forest in memory of your loved one.
MAKE A DONATION
MEMORIES & CONDOLENCES
5 Entries
Dear Gretchen, I am sending my deepest sympathies to you and your family for your loss. Hoping you find strength from those who love you and comfort from your many cherished memories. Denise
Denise Duda
Friend
September 30, 2021
So sorry to hear about Ros may the love of friends and family carry you through this Difficult times
Jackie Rome
September 30, 2021
Dear Gretchen and the Hall Family, We will all miss Ros dearly at Wesleyan Potters! He was a steady and supportive presence throughout many years both as a member and as a volunteering spouse during Annual Sale season, GalleryShop openings, art talks. Respectfully, Liz Blodgett Director
Elizabeth Blodgett
September 29, 2021
Gretchen, I am so sorry for your loss. I hope your fond memories will give you strength at this difficult time. Warmly, Rachel
Rachel Donnell
Friend
September 28, 2021
Ross was a Lions' Lion and proudly served the local community for decades. The world was a smarter and kinder place with Ross in it. We will all miss him dearly.
The Mansfield Lions
Friend
September 28, 2021
Showing 1 - 5 of 5 results