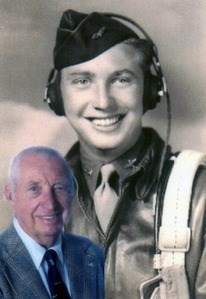 BORN
1923
DIED
2021
ABOUT
Van Nuys Senior High School
Warren D. Sortomme, beloved husband, father, grandfather, great-grandfather and friend, passed away on August 27, 2021, in Simi Valley, California. He had just recently moved here from Oceanside, where he and his wife, Joyce, had lived for over 30 years. Warren turned 98 the week before his passing and was able to celebrate the milestone with his family. Born in Eau Claire, Wisconsin to the union of Richard Sortomme and Selma Klungseth. Warren had 5 brothers and 1 sister who have all predeceased him. Warren moved to Van Nuys, California in 1938, attended and graduated from Van Nuys High School (Class of '41). He joined the military on April 18, 1942. He married his high school sweetheart, Jean Prescott on July 3, 1943. The newlyweds were sent to Albuquerque where he received additional training. By October, Jean found out she was expecting. In early 1944 Warren was sent to Boca Raton, to further his training and Jean went to stay with her parents. On May 28, 1944, he received new orders and called Jean to say goodbye. Jean was in the hospital just having given birth on May 27th to their first daughter, Carol Jean. Warren was a member of the 'Greatest Generation' and proudly served in the Army Air Corps during World War II. He was attached to the 485th Bomber Group. On August 27, 1944, exactly 77 years before his death, Warren was the Navigator on a B24 Liberator, flying in his 30th bombing mission over Germany, when his plane was shot down. Warren parachuted out and landed on the roof of a barn, sliding down and breaking both ankles and his back when he hit the ground. The local farmers wanted to kill him but the German soldiers came along and forced him to ride on a bike for 5 miles to start his journey to prison camp. Warren spent 9 months in a German prison camp and on April 29, 1945 the lead tanks of General Patton's 3rd army were at the gates to liberate the POW's. After returning stateside Warren was awarded the Distinguished Flying Cross and Air Medal, which his family had received while he was a POW. He also was awarded the Purple Heart, POW medal, Victory medal, ETO 7 Battle Stars and from Greece the Liberation medal. In 2010 he was awarded the Ordre National De La Legion on Honneur from the French government. Warren returned to civilian life and joined his father-in-law working at Prescott & Edwards, an auto repair shop in Van Nuys, in which he later went on to become a business partner. In March of 1946 Warren was accepted and became a Master Mason in Van Nuys. In December of 1948, Warren and Jean purchased their home in Sherman Oaks using his GI Bill. January 29, 1949, their second daughter, Terry Ann was born and their family was complete. In 1952 Warren was contacted by Paramount Pictures to give technical assistance for a new motion picture being filmed, "Stalag 17". He actually appeared in the movie and became a member of SAG. Warren became Commander of the American Legion Post 192 in Van Nuys. The family went on to enjoy many camping trips to Yosemite. Sadly in 1971 Jean passed away from cancer. To fill his time Warren joined the Woodland Hills Shriners and became well known as "Freckles" the clown. He was in many parades with his "Ellie" the elephant. After semi-retiring Warren loved doing woodwork jobs and remodeling kitchens and baths. In 1982, his friend encouraged him to call Joyce Young, who needed a new kitchen. Joyce and Warren became very close and after time, he asked her to marry him. They were married on March 26, 1983 in Big Bear, CA at Chapel in the Pines. They had a wonderful life and spent many years traveling in their trailer to all 50 states and visiting every capitol. They even drove all the way to Alaska! After 5 years of marriage, they purchased their dream home at Emerald Lake Village in

Oceanside and made many friends. Warren joined a POW bomb group and other Veteran's groups. Due to failing health in 2021, Carol and Terry moved the couple up to Simi Valley so they could be more attentive to their needs. Warren is survived by his wife Joyce (Yates), children: Carol Cooley of Simi Valley, Terry Hodgins (Tim) of Simi Valley, 5 grandchildren: Kristen Cooley Hunter, Timothy Cooley, Andrew Hodgins, Jennifer Cooley Murphy, and Jessica Hodgins Edwards plus 13 great grandchildren.

A private interment will be held at Forest Lawn Hollywood Hills in October with full military honors. In lieu of flowers donations to the Shriners Children's Hospital Southern California would be appreciated.
Published by MilitaryTimes.com on Sep. 25, 2021.
To plant trees in memory, please visit the Sympathy Store.
MEMORIAL EVENTS
To offer your sympathy during this difficult time, you can now have memorial trees planted in a National Forest in memory of your loved one.
MAKE A DONATION
Please consider a donation as requested by the family.
MEMORIES & CONDOLENCES
0 Entries
Be the first to post a memory or condolences.