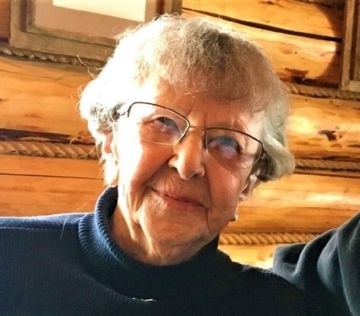 Fern Adell Olson passed away on July 7, 2021 at the age of 91. She was born in Erskine, MN on April 15, 1930, the second of the three daughters (Lovey and Norma) of Norman and Georgia Erickson. It was when the family moved to Drayton, ND that Fern first set eyes on Elwood "Woody" Olson. Coming home from school in the first grade, she told her mother that was who she was going to marry. The seed was planted for a love story that would go on to bless us all.

Fern grew up in Drayton. She attended Concordia College in Moorhead MN, earning a teaching certificate. She famously received three proposals of marriage. Thankfully for us, Woody's proposal, at the Drayton town dump, was the one she accepted. Within her first year of marriage Fern became a mother with the birth of twins Barry and Gregg, followed four years later by Jay. When Woody accepted a banking job in Missoula, MT, Fern went graciously, leaving behind her family and the flatlands of ND/MN. Their fourth son, David, was born in Missoula and that is where they put down roots and spent the rest of their days.

Fern's life was about three things – her faith in God, her husband and her family. She loved reading and studying the Bible and praying for and with people. She loved to sing. She was always active in the churches the family attended, leading and attending Bible studies and participating in various ministries. Fern loved Woody and they had fun together, sharing an extraordinarily happy marriage for 66 years. In later years they could often be found drinking coffee at the mall. Many people have memories of running into them there, being greeted warmly and coming away uplifted and encouraged. The four boys grew up in a family that was rich with time together: gatherings with friends, church activities, holiday celebrations, camping, summer trips home to ND and, later, annual family time at Double Arrow Ranch. It was her great joy to welcome daughters-in-law Jill, Debbie and Jeannine into the family. Eventually she and Woody were blessed with eleven grandchildren: Halden, Kjel, Bryan, Josh, Heidi, Carrie, Josilyn, Trevor, Brianna, Allie and Tanner. They delighted in them, loving them, supporting, encouraging and praying for them. They rarely missed an event one of the grandkids were involved in.

Fern's family is her legacy; her four sons, who will miss her caramel rolls and dumpling soup; their wives, who are thankful for the sons she raised; her grandchildren, who remember her as a prayer warrior who was faithful, patient and kind; and Elliana, Declan, Nora and Sayer, who will grow up hearing stories of their great-grandmother. Fern is also survived by her sister, Norma, sister-in-law Ruth and her nieces and nephews. Waiting in heaven were her beloved Woody and two of her grandsons, Trevor and Tanner Olson. We often heard Fern speak of a vivid dream she had of meeting Tanner and Trevor in heaven, a dream that has finally come true.

Published by Missoulian on Jul. 15, 2021.
To plant trees in memory, please visit our Sympathy Store.
MEMORIAL EVENTS
Jul
19
Memorial service
3:00p.m.
Missoula Alliance Church
100 E Foss Court, Missoula, MT
MAKE A DONATION
MEMORIES & CONDOLENCES
3 Entries
what a lovely tribute to her and her life. my thoughts and prayers are with you all.
patricia a kent
July 17, 2021
Love you mom!!
Gregg Olson
July 16, 2021
My favorite Fern quote is: "Women need women". She would say this with such conviction at Bible Study that we would all leave feeling a little better for just having spent time with her that day. As the mother of 4 sons, we trusted that she knew what she was talking about! Love to the entire Olson family, you were loved by two of the best people I have ever known. RIP Woody and Fern.
Laurie Stipe Hege
July 15, 2021
Showing 1 - 3 of 3 results