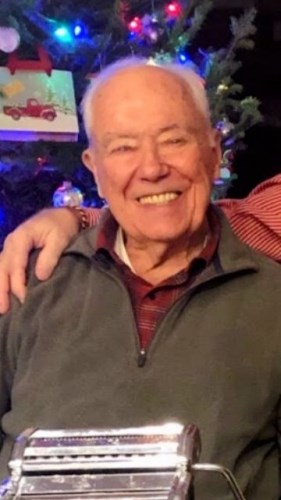 Dr. John Lyman Brown, Jr. ("Unc") left us on June 6, 2021 at St. Patrick hospital surrounded by loving family. He has gone to the Great Beyond – where many of his friends and relatives are waiting to see him.

Unc was born August 2, 1930 to Dr. John Lyman and Molly Judith (Griffin) Brown in Hackensack, N.J. The eldest of their three children.

Unc attended Cornell University and graduated with his BA in 1952.

One of the more interesting jobs Unc had during summer breaks from college was driving an ore truck in the Mesabi Iron Range in northeastern Minnesota, the chief iron ore mining district in the United States.

Unc then attended medical school, graduating from Cornell University Medical College in 1955, after which he enlisted in and served as a Lieutenant in the U.S. Navy. He later received a Military Service Recognition from the Liberty Tree Chapter of the Sons of the American Revolution for his service.

Following his stint in the Navy, Unc practiced internal medicine (Nephrology) from his office on Park Avenue in New York City. He treated numerous famous and not so famous patients who would often give him gifts in appreciation of his medical care. He loved to tell stories about this time in his life to which we all listened with fascination.

After decades of medical practice Unc retired to his country place in Bethlehem, Connecticut, a farmhouse built in 1730. From there he followed his passion for the flora of the world. He studied plants with the same intensity he had once studied medicine. He became a member of the Brooklyn Botanic Society and traveled to see the rain forests of the world from the Amazon to Costa Rica and beyond. It was on these trips he also became an avid bird watcher and, as any good student would, meticulously kept a journal of his sightings.

Twenty some years ago Unc left New England to come west to Montana to be nearer to family here in Missoula, and two nephews and their families in the Seattle area. We had many fine dinners holding hands around the table saying our "thankfuls" before the meal. Unc would always say simply, "I am thankful to be here with my family." We were always thankful to have him. A Christmas Eve tradition was to make homemade ravioli pasta with Unc turning the crank on our old pasta making machine with a smile as wide as a rainbow.

Unc was an avid reader. His library was stocked with everything from the "Alice B. Toklas Cookbook" to many of the works of Vladimir Nabokov and everything you can imagine in between. He was a part of several book groups around Missoula. Although his eyesight began to fail him in his last year, every day he read the morning paper and one of his many scientific magazines even if he had to use a magnifying glass.

Uncle John deeply enjoyed classical music and often sought out performances of the world's best symphonies and the opera in New York. His nephews recall trips to NYC that included evenings at the Metropolitan Opera and the NY Philharmonic Orchestra. One particularly memorable moment was a surprise trip Unc took with his nephew Jeffrey and his wife while they were visiting him at his home in Bethlehem, CT. The Boston Symphony Orchestra was performing at the BSO's outdoor summer venue at Tanglewood in western Massachusetts. The guest soloist and performer was none other than YoYo Ma, the brilliant cellist. It was a fabulous summer evening in MA. That wonderful evening comes to mind now as we remember Uncle John.

He loved to sit on our deck smelling the air, enjoying the flowers and the wind through the trees, watching the deer and the birds. He especially liked when Max our cat would come and nap for a spell upon his lap.

Uncle John was kind, generous, intelligent, with a spark of mischief about him. When he deadpanned a joke you could always see a bit of twinkle in his eyes. He was positive and engaging, with great energy and wit during our many lively conversations, consistently challenging our assertions. Well read and somewhat philosophical, his scientific training often came to the fore when, employing a bit of Socratic method, his questions would be designed to discern whether our particular position was based on evidence or was merely anecdotal. This became a benchmark in our family. We often laugh at one another's assertions and exclaim, "that's just anecdotal!"

Unc met the love of his life, Ed Ranzenhofer, while they were both still in medical school. Ed became a psychiatrist and together they made their home in Manhattan and practiced medicine for nearly twenty years until Ed's sudden passing in 1986 from pancreatic cancer. It was always a great sadness to Unc that he and Ed lived together during an era in this country that gay persons were not free to "come out," and to live their lives openly as their heterosexual counterparts did. Unc was heartened when he moved to Missoula at the turn of this century and strides were being made in this community and elsewhere to turn that tide. He also was very appreciative of the "open and affirming" philosophy practiced at the church he regularly attended and supported.

Services will be announced at a future date.

To plant trees in memory, please visit our Sympathy Store.
Published by Missoulian on Jun. 20, 2021.
MEMORIAL EVENTS
No memorial events are currently scheduled.
To offer your sympathy during this difficult time, you can now have memorial trees planted in a National Forest in memory of your loved one.
Funeral services provided by:
Garden City Funeral Home
MAKE A DONATION
MEMORIES & CONDOLENCES
Sponsored by Garden City Funeral Home.
2 Entries
John was a great friend of mine. I met him online just before he decided that he was moving to Montana. We had a lot of the same thoughts and flew back to CT and helped him pack and then we drove back to Missoula. John and I did quite a bit of traveling around MT and once a trip to Roundup where his Mother was born. The lady that had their home then asked to come in and showed us around. I moved to Pahrump, NV and the year that Death Valley had wild flowers, from the large amount of rain, we spent a lot of time over there looking at all the flowers and of course taking pictures. When I traveled back to Missoula he would always let me stay at his football home. He would always remind me that it was a leaf. In the spring he always had a lot of Deer grazing in his acreage. At times their were Elk there also. What a view he had from his front porch and I have many pictures that I took from it. A really great man.
Jack G. Schwartzman
Friend
June 21, 2021
John was such a wonderful man. So gentle and kind. I will miss seeing him. Our condolences to your family.
Bonnie Netzley
Friend
June 21, 2021
Showing 1 - 2 of 2 results