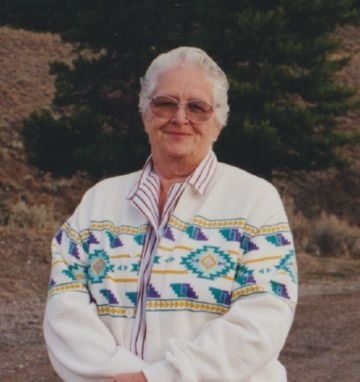 Mary Freshour Voss born July 5, 1929 passed away on July 5, 2021. She was 92 years old. Mary was the only child of Daniel Earl and Rachel Freshour. She attended school in Arlee, MT and graduated from Arlee High School in 1947. She attended Missoula Business College and worked at the Super Cream Café'.

After completion of business school Mary went to work for the Flathead Indian Irrigation office and worked there until her marriage to Olin Smith from Dixon. They bought a home in Alberton and had a son, Mark and daughter Lola who both preceded her in death. Olin and Mary bought the Alberton Mercantile and Bar. Upon the death of Olin, Mary sold the business and moved to Milltown where she worked at the Harold's Club. While working at the Harold's Club she met her future husband, Stanley Voss. She then moved to Missoula and worked a short time at Estes Appliance store and from there to the City Treasures Offices as a licensing agent for the City of Missoula for 8 years.

She is survived by two grandsons, Brent Ford and his wife Carl in Kansas City, MO and Steve Sandness in Denver, CO. She also has two step-sons, Jerry and Chris Voss of Missoula; two step grandchildren, Andrew and Carrie Voss and a step-daughter-in-law Vicki Voss (Clinton). She also has a third step-son Raymond Voss (Clinton) who preceded her in death.

Mary would also like to thank Kathy, Doug and Jennie Kimmel for welcoming her into their family home the last two years of her life and taking "such good care of her".

In lieu of flowers, Mary asked that donations be made to the Arlee Historical Society or the Cancer Society of America.

To plant trees in memory, please visit our Sympathy Store.
Published by Missoulian on Jul. 14, 2021.
MEMORIAL EVENTS
Jul
16
Graveside service
11:00a.m.
Missoula Cemetery
2000 Cemetery Rd., MT
MAKE A DONATION
Please consider a donation as requested by the family.
MEMORIES & CONDOLENCES
0 Entries
Be the first to post a memory or condolences.