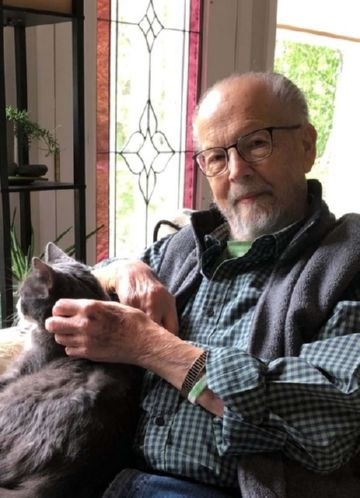 William Washington Keefer III, known as Peter Keefer for all his life, died from pulmonary fibrosis early in the morning of November 13, 2021 at his home in Missoula. His wife of 40 years, Carol Hoffnagle was with him, as she had been throughout the last days of his life.

Peter was born in NYC, January 26, 1933. His parents divorced two years later which resulted in a long childhood for him as he lived with various friends and relatives while his mother earned a medical degree in pediatrics. He and his best friend and partner-in-mischief, his cousin Tony, graduated from Hollywood HS in California. Peter went on to get a Bachelor of Fine Arts degree from California College of Arts and Crafts in Oakland.

After moving back to Los Angeles, he became a founding member of the Los Angeles Printmaking Society and a member of the Western Serigraphic Institute. In 1963, California State University at Northridge awarded him his teaching credentials and a Master's Degree in Printmaking. He taught high school art at Simi Valley HS for 10 years before pursuing his professional art career full-time.

He also did his service in the military with Marine Corp Test Unit No. 1. In 1955, he witnessed an atomic bomb detonated 3,500 yards from his self-dug trench and then marched over ground zero, "where the sand had melted into glass." As an artist he said he saw the most amazing colors, despite the fact that he saw them through the back of his head.

While married to his first wife, Joyce Keefer, he had 4 children. Dorothy Hensey, Ted Keefer, Joyce Alice Abarta, who survive him and Christopher Keefer, who had predeceased him. He was a loving grandfather to eight and great-grandfather to six.

He met Carol when he had a show at the gallery where she was working in Scottsdale AZ. They married two years later in 1981 and Peter acquired 5 brothers and sisters, 11 nieces and nephews and 7 grand nieces and nephews. It was all the family he missed having as a child. They both continued with their art careers, living in Long Beach CA while also renting a home in Taos NM, then moving to Marin County in northern California They worked with multiple publishers who distributed their limited-edition prints, posters and notecards worldwide. His unique technique of relief printing resulted from a process he developed using ¼ inch Masonite as a plate and specially made rollers to ink them. The process was refined and mastered by Bob Barry of Chameleon Press in El Paso TX, who printed all of Peter's print editions.

Their last move was in 2003 to Missoula MT. Here he became a member of the Saltmine, a group of 7 exceptional artists who decided to band together and put on their own shows. They frequently had shows at Gallery 709 where Peter also had several one-man shows. He also exhibited at the Dana Gallery, Missoula; The Frame Shop and Gallery, Hamilton; Yellowstone Photo Gallery, Missoula; UC Gallery, University of Montana, Missoula; River's Mist Gallery & Fine Art, Stevensville.

His major show was in 2010, when he exhibited the Great War (detail) Series at the Missoula Art Museum, consisting of 39 drawings accompanied by quotes from many of the leading figures of World War I. He used the imagery and quotes to reflect his observations on the futility of war. Peter was always interested in history and read over 60 books to research the series. Music was another of his many interests and he collected over 1,100 vinyl records ranging from Bach to ZZ Top. He enjoyed making custom CDs for his friends, creating both the playlist and the artwork for the covers. His artwork was ever evolving, most recently exploring a new medium, digital prints saturated with color. He was always true to his own vision.

All dogs and cats will miss him dearly for his special bond with them, especially his kitties, Hudson and Jasper who found his lap the most comfortable place to be.

How old would you be if you didn't know how old you are? – Satchel Paige

Published by Missoulian on Nov. 30, 2021.
To plant trees in memory, please visit the Sympathy Store.
MEMORIAL EVENTS
To offer your sympathy during this difficult time, you can now have memorial trees planted in a National Forest in memory of your loved one.
MAKE A DONATION
MEMORIES & CONDOLENCES
2 Entries
Carol: I am so sorry to hear of Peter's passing. I have fond memories of him at our get together in Walla Walla. Please let me know if there is anything we can offer. John
John Hoffnagle
December 5, 2021
So sorry Carol. We have some great memories of your fabulous gatherings across the street! And we are reminded of Peter's great talents with the picture he made us that is hanging on our wall. Sending you warm hugs and strength during this time. xx
Claire and Don
Friend
November 30, 2021
Showing 1 - 2 of 2 results