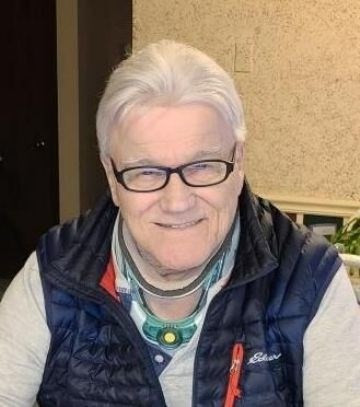 Rod was a man of great faith with a deep love for Jesus. He spread this faith to his children and every person he encountered. He was a poet, philosopher, and storyteller. He was a man who looked for the deeper meaning of everything in the world, always watching for miracles as confirmation of God's love. His love for his family extended to many others, which encompassed what he referred to as his "love bubble." In addition to being excited to see Jesus smile and his loving family who preceded him in death, he looked forward to a front row seat at an eternal Ray Charles concert.

Rod graduated from Loyola High School in Missoula, Class of 1960, and following graduation, attended the University of Montana while working nightshift at the Bonner Lumber Mill and making deliveries for Majestic Wholesale during the day. He made his way to Duluth, Minnesota and began his retail sales career, which eventually brought him to Watertown, South Dakota where he soon met Karolyn, the love of his life, and raised five children together. He was a successful business owner of Rand Shoe Company in Grand Forks, North Dakota. Later on he became an award-winning salesman for KPAX TV in Missoula, where he built life-long relationships with his clients, including a special friendship with the owners of Sapphire Gallery and The Sweet Palace in Phillipsburg, Montana.

He was a member of the board of directors for Awakening Montana, a non-profit organization dedicated to the awareness of Sudden Infant Death in Montana. He also coached Little Grizzly Football and was an avid fan of North Dakota hockey, Montana Grizzlies, and Minnesota Vikings.

Rod was born December 8, 1941, in Missoula, Montana to Gene E. and Bertha D. Trenary, both deceased. Rod was preceded in death by his brother, Darrell G. Trenary and his daughter, Gretchen Phelps.

He is survived by his daughter and her spouse: Heidi and Dan Swingen of Grand Forks, North Dakota and their children Nicholas, Michael, and Brooke; his son and son's spouse: Kerry and Paige Strom of Grand Forks and their children Lucas and Samuel; grandchild Garrett Phelps (son of Gretchen Phelps, deceased); his daughter and her spouse: Jaime and Brad Odell of Alberton, Montana, and their children Ryan, Eryn, and Barrett; and his son and son's spouse: Blain and Amy Trenary of Hohenwald, Tennessee, and their children Shamus, Aeddon, Abigail, and Naomi. He is also survived by three brothers and their spouses: Gary and Nancy Trenary of Frenchtown, Montana; Brad Trenary and Mike Darr of Vashon Island, Washington; Kim and Renee Trenary of Apple Valley, Minnesota; his sister, Jean Trenary and Patty Gardner of Walla Walla, Washington; and Anna Trenary (spouse of Darrell Trenary, deceased) of Lakeville, Minnesota. Four great grandchildren, several loving nephews, nieces, in-laws, and friends across the country will miss Rod and mourn his passing.

Funeral services will be private with immediate family only. A mass open to extended family and friends will be announced at a later date. The family suggests memorials to St. Jude Children's Research Hospital, 501 St. Jude Place, Memphis, TN 38105; www.stjude.org.

To plant trees in memory, please visit our Sympathy Store.
Published by Missoulian on Jul. 20, 2021.
MEMORIAL EVENTS
No memorial events are currently scheduled.
To offer your sympathy during this difficult time, you can now have memorial trees planted in a National Forest in memory of your loved one.
MAKE A DONATION
Please consider a donation as requested by the family.
MEMORIES & CONDOLENCES
3 Entries
Loving condolences to family.
Staci Hedrick
Friend
July 23, 2021
Susan and I were saddened to learn of Rods passing - We knew him well when he lived in Grand Forks .W were social friends and Susan was " a good customer " of Rods shoe store - Rod was a true friend and we missed his companionship and friendship after he moved to Montana . Through his son Kerry - who we sat next to at Sioux hickey games. God bless the memory of Rod Respectfully Pat Maddock
Patrick & Susan Maddock
Friend
July 22, 2021
Jaime, So sorry to hear of your fathers passing. He was a wonderful man. I will always remember numerous head shakes as we told him what we had up our sleeve next. Please know that you are in my thoughts and prayers. Love Becky
Becky Pamin (Callison/Mercer)
Friend
July 20, 2021
Showing 1 - 3 of 3 results