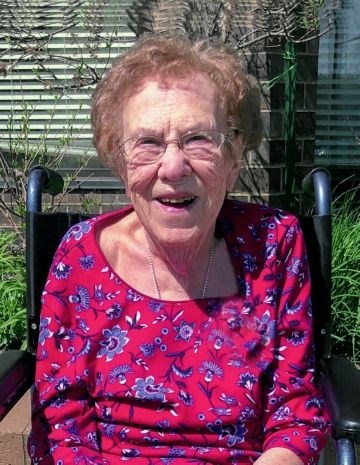 Born in China, made of Norwegian parts. That was how Ruth liked to describe herself. Those two heritages were lifelong influences for her. Ruth Solveig Skinsnes, named by her older brother who had scarlet fever, was born April 4, 1924 in Sinyang, China. Her parents were medical missionaries who arrived in China in 1915. She had two older siblings, Olaf and Phoebe. Growing up in China in the midst of poverty, wars and disease, her childhood experiences were far different than most of ours. Sister Hilda, a Lutheran Deaconess, helped deliver her and provide education in her early years. Later schooling occurred at boarding schools, which entailed long periods of time away from her parents. She learned self reliance, which served her well throughout her life. Forced out of China by war in the late 1930s, she finished high school in the US and enrolled at St. Olaf as an art major. It was there she met Jake, her future husband. They were engaged in 1943, shortly before he left for service in the Air Force and were married in 1945 after his safe return.

After Jake graduated from dental school, they settled in Kenyon, MN. For many years in Kenyon she was the selfless partner raising their family of three children, Rolf, Kathy and Heidi. Her support was critical for Jake as he built his practice and served on various church and dental boards. Two significant events she shared with Jake were the dental mission trip to Tanzania in 1966 and the purchase of the lake cabin on Two Inlets Lake in 1975. The family lived in Tanzania for two months while Ruth assisted Jake as he performed dental work. They made a good team, changing many lives in a positive way. The lake cabin provided the family with many memories, along with many friendships that continue to this day.

Ruth served as President of the Goodhue County Dental Auxiliary, as a Board member of the St. Olaf College radio, and as a Sunday school teacher. After her children graduated from high school, she used her art skills working at the Kenyon Art Gallery for 11 years. After retirement, she and Jake wintered in Arizona for 20 years together. Silversmithing became a passion for her and she was treasurer of the silversmithing club for six years. She also continued with knitting and reading until her eyesight began to fail. The "born in China, made of Norwegian parts" lady had a long, impactful life.

She was preceded in death by her husband Jake, her brother Olaf, and her sister Phoebe.