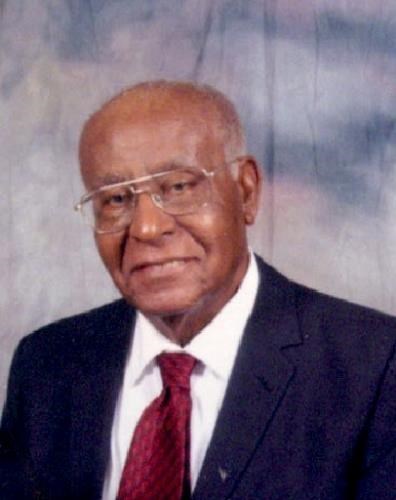 BORN
1924
DIED
2021
FUNERAL HOME
Small’s Mortuary - Mobile
950 South Broad Street
Mobile, AL
Lonnie Lee Lambert was born on July 2, 1924, in Frisco City, Alabama, to the late Robert Lambert and Daisy Marshall Lambert. He was the fifth and last surviving sibling among six children born to this union. He departed this earthly life at the age of 97 on September 14, 2021, in Mobile, Alabama. He was preceded in death by his parents, his five siblings, his beloved wife Theaphus Crandall Lambert in 2014, and by his eldest daughter Claudette Lambert Dunn in 1994. The Lambert family moved to Daphne, Alabama when he was a young boy. While Lonnie accepted Christ at an early age, he attended Macedonia Baptist Church in Daphne where he received much of his early religious foundation. Later in life he became a member of True Light Missionary Baptist Church, Prichard, Ala., where he joyously recommitted himself to Christ and reaffirmed his faith. As a young man, he attended Baldwin County Training School where he developed a love for reading, a strong curiosity about the world around him, and a drive to know about how things work. Throughout his life he avidly read newspapers daily, and he remained current on news and world events. He was fascinated by how the advent of the Internet transformed the exchange of news and information. Through it all, his continuous quest for knowledge never wavered. For him, learning was a lifetime experience. Having actively served in both World War II and the Korean War, he proudly served as a decorated member of the United States Marine Corps for many years. He lived his life with a strong sense of honor and duty. His military experiences helped to mold him into the proud, loyal and self-reliant individual he became. He was united in marriage with Theaphus Crandall Lambert in1948. To this 66 - year union three daughters were born. Mr. and Mrs. Lambert resided in Prichard, Alabama for over 60 years, where they raised their family and developed a strong sense of community. As a couple, they forged an admirable life of courage, respect and gratitude. He served as a dedicated employee of the U.S. Federal Government for approximately forty years, having been employed initially at Brookley Air Force Base in Mobile, Ala. for many years, and ultimately at Pensacola Naval Air Station in Pensacola, Fla., from which he retired in 1986. Being a person with a strong work ethic, upon federal retirement, he continued working as a licensed electrician in the community. In addition to church service, for many years he was an active member of the Prichard community, enthusiastically participating in neighborhood affairs until his health began to fail. He lived his life with secure faith, convictions, and unwavering strength; and although his voice is now stilled, memories he left will live on. Survivors left to cherish Lonnie's memory are his beloved daughters, Paulette L. Green (James) of Burke, VA, and Marilyn L. Yates, his primary caregiver, of Eight Mile, AL; five granddaughters, Candice D. Phillips (Danny), Marcelyn D. Yates, who was especially devoted to him, Crystal R. Dunn, Kirsten D. Johnson, and Paula L. Green; one grandson, Cameron A. Green; and six great grandchildren. He is also survived by numerous nieces, nephews, cousins, and other friends, including a devoted friend, Walter Eaton. Lonnie Lambert was an individual of honorable character and strength. As the decades of his life rolled past, his family and friends never ceased in calling upon his judgement and seasoned wisdom. He will be forever missed, as he has left a legacy of courage and love. He enriched the lives of those who knew and loved him. Mr. Lambert will lie in state on Fri. Sept. 24, 2021 from 4pm to 8pm in IJ Small Family Center at Small's Mortuary, Mobile. A graveside service will be held on Sat., Sept. 25, 2021 at 1pm at Little Bethel Cemetery in Daphne, AL. DIGNIFIED AND PROFESSIONAL SERVICES ENTRUSTED TO SMALL'S MORTUARY, 950 S. BROAD ST., MOBILE, AL 36603.