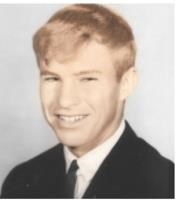 ABOUT
Oakdale High School
Glenn Wayne Fox
Glenn Wayne Fox formerly of Oakdale, California, last of Sallisaw, Oklahoma, died on June 15, 2020, at St. Francis Hospital in Tulsa, Oklahomoa. He suffered a brain hemorrage from which he did not recover. He was 73 years old, divorced, and had no children. He was born in Modesto and grew up in Oakdale. He graduated from Oakdale High School in 1964. He attended radio announcer school and had a long local career with radio stations such as KTRB, and was known as the "Silver Fox" in part due to a great broadcast voice.
In 1993 his parents, Allen and Marie Fox, who had originally migrated to Calfornia from Sallisaw during the Great Depression, decided to move back to their home area in Sallisaw. Glenn moved with them. In the late 1990s his parents' health declined and they moved back to Oakdale while he remained in Sallisaw. He had a variety of jobs and finally purchased a local bar, The Finish Line, which he operated until about 2010. He advertised the bar as "Coldest Beer in Downtown Sallisaw."
When he was young he raced dirt bikes and became a huge fan of NASCAR. He became a great sourceof local and national history in both Oakdale and Sallisaw, in particular country and rock and roll songs and performers, NASCAR drivers, classic cars, and especially the life and times of Pretty Boy Floyd, a local Depression outlaw, and dedicated a portion of his bar to an historical display about him. He often returned to Oakdale to visit family and friends, especially for class reunions.
He was cremated and his ashes returned to the home of his sister, Pauline Fox Ward and her husband Michael Ward. No other members of his immediate family, mother, father, brother Robert and sister Mary Lou have survived. He is survived by nieces Torri Bergstrom and Stephanie Bjorge, grand nephew Jeremiah Lobaugh(Hailey, son Noah) and grand niece Tiffany Byrd as well as his sister in law Susan Fox and her children nephew Michael(Martia, daughters Catherine, Elizabeth) and niece Patricia(Joel,son Milo).
Family and friends will gather for a remembrance as soon as pandemic conditions allow. Family can be contacted at 209 499 0012 to be listed and available to mail notice of time and place of remembrance.
www.cvobituaries.com

Published by Modesto Bee on Jun. 28, 2020.
To plant trees in memory, please visit the Sympathy Store.
MEMORIAL EVENTS
To offer your sympathy during this difficult time, you can now have memorial trees planted in a National Forest in memory of your loved one.
MAKE A DONATION
MEMORIES & CONDOLENCES
0 Entries
Be the first to post a memory or condolences.