BORN
1936
DIED
2013
Larry Shyres Banner
June 4, 1936 - November 28, 2013
Larry Banner entered his eternal rest with the Lord on Thanksgiving Day, November 28, 2013.  He died peacefully at home in Modesto, surrounded by his loving family.  He was born in Los Angeles, California to Eldren O Banner and Catherine Gillette LaVette and resided in Modesto for twenty-three years.  His parents and his brother Terrance O Banner preceded him in death.  He is survived by his loving wife of 47 years, Martha Estella Banner, his sons Eric Alexander Banner and Bret Christian Banner, his grandchildren, Emalee Fern Banner and Ryan Christopher Banner, and his sister Sherry Daniels.
Larry's achievements in athletics, education and career are quite numerous and impressive.  He was a person who always beat the odds.  At age seven, Larry was diagnosed with polio, but he was a survivor. He spent almost a year in a wheelchair and later used forearm crutches.  His spine was so deformed that he had to attend special Physical Education classes up to the 10th grade in high school.  These classes met in a gym where he started some tumbling and apparatus stunts that he was able to do since his arms had become incredibly strong after being in a wheelchair and crutches for a year and a half.  By the 11th grade, he was given clearance to participate in sports, so he began to compete in gymnastics, swimming, football and track at Van Nuys High School.  High School Honors:  Competing with all Los Angeles high schools  -Gymnastics gold in Long horse and parallel bars (1954); Selected on the first team all city football team as Defensive Back.  This selection was made from the city's 52 football teams; Swimming: Gold-Van Nuys High School team, Gold - 100 & 200 yd. individual backstroke races; Track and Field (LASDC), Gold-10# Shot put.  He received three Valley league titles.
The following are some honors at the college level:  California Association of Junior College Championships; Gold team LA Valley JC, AA and numerous other events (1955 -'56).  His superior ability was recognized by UCLA and they offered him a scholarship.  Southern Pacific Conference (AKA) Pac 8 Championships: Gold team UCLA, AA and many additional events (1957-1958). The AAU and NCAA designated Larry Banner as an All American gymnast (1961).  Southern Pacific Association of the Amateur Athletic Union:  Gold-AA, (1961-1962).
Olympic Games:  No medal, but Larry had the best American AA score since the first modern games began in 1900 (only a few full gym teams had participated in the Olympic games in the early years), Rome Italy, (1960); Team Captain, Tokyo, Japan, (1964).  World Championships:  In Larry's first international competition, he probably was the first to execute Pummel Horse circles and the "Moore" on the Free Exercise floor.  This was in Moscow in 1958.  He also competed in Prague, Czechoslovakia in 1962.  National AAU Championships:  At the Roy E. Moore U.S.A. Gymnastic Championships:  Gold - Team, L.A. Turners Gym Club (1959, 1960 1961). There are many others for individual gold, silver and bronze that are too numerous to mention.
Larry was inducted into the United States Gymnastics Hall of Fame in 1993 and was inducted into the World Acrobatic Society - Gallery of Acrobatic Legends in 2011.
His education and work are equally impressive.  He received his BS at UCLA (1958), his General Secondary Teaching Credential at California State University at Northridge (1960), M.A. at California State University at Long Beach (1966), and an Ed.D. at Arizona State University with a major in Clinical Reading Education.  He graduated first in his doctoral class.  He later was honored with an Honorary Ph.D. in psychology.  This was awarded him after completing his internship at Maricopa County Hospital.  Larry's Ph.D. focused on psychometrics.  He worked as a psychometrist, an outpatient clinician, a consultant, and a secondary and university educator.  As a consultant, he worked for school districts, the U.S. Department of Defense and the Department of Army-Forces Command where he researched ways in which classroom and field training could complement one another.
Such great achievements at the end of one's life should be noted, but Larry always said that there was no greater honor and blessing than the love of his family and God.  He ran the final race and has now received the greatest treasure - his heavenly crown.  He had a very generous heart and the most beautiful smile.  If someone was in need, he was there. He loved playing golf and going fishing with his sons.  This was a passion for him.  His wife Martha thanks the Lord for giving her such a loving husband for 47 years, and his sons say, "I will miss you Dad (Pop). I love you so much. You are my hero".
The service will be on Wednesday, December 11th:
Rosary at 10:00am followed by a Funeral Mass at 11:00am at:
St. Stanislaus Catholic Church
1200 Maze Blvd.
Modesto, California 95351
During his ailing health The Sisters of the Cross of Modesto were a great support and comfort to him and the family. We request that in lieu of flowers, that a memorial donation be made to:
The Sisters of the Cross
1320 Maze Blvd.
Modesto, California 95351
www.cvobituaries.com

Published by Modesto Bee from Dec. 4 to Dec. 7, 2013.
To plant trees in memory, please visit the Sympathy Store.
MEMORIAL EVENTS
To offer your sympathy during this difficult time, you can now have memorial trees planted in a National Forest in memory of your loved one.
MAKE A DONATION
MEMORIES & CONDOLENCES
9 Entries
A wonderful teacher; we didn't really appreciate his talents and skills when he taught at Corona del Mar High School.
Bob D
December 2, 2014
Kenneth A. Molen-Classmate and gymnastics team member of Larry Banner. -I just found out on 10-5-14. I was shocked and saddened. We worked out together at East LA high school and I visited his family home in the Valley. He was my hero in High School. My religion teaches (LDS) that family and friends will see him again. Love and sympathies from Ken Molen(Class of '54, Van Nuys) [email protected]
Kenneth Molen
October 5, 2014
My Dad and I were so sorry to see that Larry had past away. He was such a help to me in getting my Dad's Hall of Fame biography complete. Besides our e-mails I spoke to Larry on the phone and we had a great conversation. My Dad and I both have fond memories of Larry when he was competing as well. Our thoughts are with you all in your loss of a really great guy.
Lois Wilderoter
August 19, 2014
Hello there Marti!!! I just saw this...I had no idea that Dear Larry had passed away. I am sure it's been very difficult for you and your family. Wow, 47 years of marriage, that's almost a record!! God Bless All of you!!!! Marianne Grosskopf Parks Simi Valley, CA
August 10, 2014
Dear Martha & Family, Sorry to hear of the passing of Larry. I'm glad you had 47 years together. It was so good to see you at the 50th Reunion. God Bless You All, Carol Hill Bowen
December 10, 2013
Our sympathies and prayers go to the Banner family. May The Lord Bless you and keep you safe.
Rafael & Anne-Marie Silvas
December 5, 2013 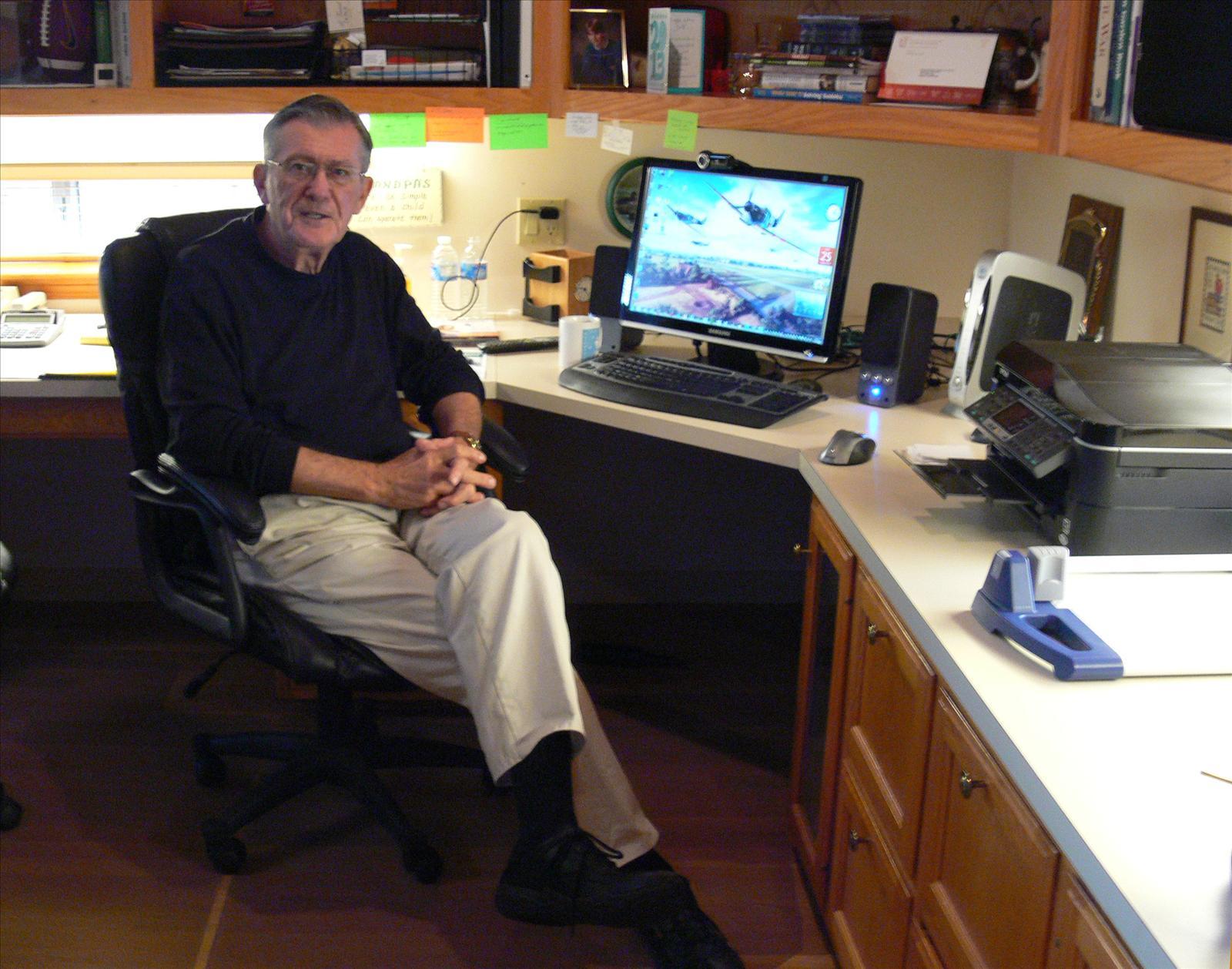 Getting to know Larry and play golf with him was one of the great gifts in life that I have received. His gentle personality, strength of character, and quiet humility belied his great accomplishments.
Richard Doll
December 4, 2013
To the Banner family,especially Martha, Eric and Brett,
I only knew Larry as a friend and reading about his life was so moving! He was such an accomplished man in so many fields. But in addition to all those accomplishments, he was so proud and devoted to his wife, sons, and grandchildren.
Please accept our sympathy for your loss. You are in our thoughts and prayers.
Sincerely,
Richard and Adriana Mooney
December 4, 2013
I send my deepest sympathy to the family. May God bless you in this time of sorrow. My thoughts and prayers and with you.
Raul Garcia
December 4, 2013
Showing 1 - 9 of 9 results