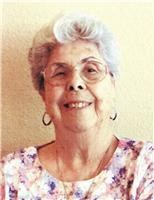 BORN
1928
DIED
2021
FUNERAL HOME
Dimond & Sons Silver Bell Chapel
2620 Silver Creek Road
Bullhead City, AZ
BARBARA M. ZEMKE
It is with great sadness we announce that Barbara M. Zemke, age 92, a long-time resident of Bullhead City, Arizona passed away on Monday, August 23, 2021 peacefully surrounded by family and friends. She was born on December 30, 1928.
Barbara was active in the quilting community and a member of Stitch N Rippits along with the Colorado River Quilters. Barbara was also a member of the City Bible Church.
Barbara is survived by her two daughters, Pamela Patterson of San Diego, California and Susan Podeschi of Prosper, Texas; her grandchildren, Lori Antonioli of Plano, Texas, Christopher Podeschi of Bloomsburg, Pa., Brian Zemke of Spokane, Washington and Erick Zemke of Spokane Washington; and eight great-grandchildren.
In lieu of flowers the family asks that you consider donations to Beacon of Hope Hospice, Bullhead City, Arizona.
Published by Mohave Daily News Online from Aug. 27 to Sep. 3, 2021.
To plant trees in memory, please visit the Sympathy Store.
MEMORIAL EVENTS
To offer your sympathy during this difficult time, you can now have memorial trees planted in a National Forest in memory of your loved one.
Funeral services provided by:
Dimond & Sons Silver Bell Chapel
MAKE A DONATION
MEMORIES & CONDOLENCES
3 Entries
We will miss Barbara's sweet spirit and kind fellowship. We are grateful to have known her. May God bless her soul.
John & Robynne Mieding
August 28, 2021
Our Deepest sympathy for the loss of dear Aunt Barbara. She was a wonderful lady. Prayers & hugs She will be missed by all who knew and loved her.
Sally Dickerson & family
Family
August 26, 2021
Your were such a wonderful beautiful person inside and out. I will surly miss you. You have a special place in my heart. I know I will see you again because we both have Jesus in our heart. To be in the presence of Jesus must be amazing. Love you Barbara, thank you for sharing your life with all those who love you.
Sandi Caylor
Friend
August 25, 2021
Showing 1 - 3 of 3 results