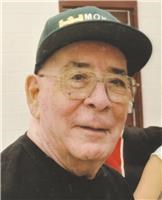 BORN
1931
DIED
2021
FUNERAL HOME
Desert Lawn Funeral Home
9250 S. Ranchero Lane
Mohave Valley, AZ
JOHN "COACH" MORALES
John Madrid Morales, age 90, passed away peacefully surrounded by his family on Tuesday, December 28, 2021 in Bullhead City, Arizona. He was born July 12, 1931 in Los Angeles, California, the ninth child of Ramon and Arcadia Morales.
He married the love of his life, Yvonne in 1978 in Lake Tahoe and they raised their family in California. John worked in the sheet metal industry for Astro-Fab as a brakeman for most of his life until he retired.
In 1991, John and Yvonne moved from Downey, California to Bullhead City. They opened the first Baskin-Robbins 31 Flavors Ice Cream and Yogurt store in Bullhead City and ran it for 20 years. It was a place where dozens of local youth were given their first job and were mentored by John. Many have expressed their appreciation over the years for the values they learned there. John and Yvonne enjoyed their customers and many continue to share fond memories to this day.
John was an avid sports fan. He and Yvonne attended all of the games played by their family as well as those of their employees. John was passionate about the Dodgers and Raiders and was a season ticket holder while living in California.
John devoted more than 70 years coaching sports in various capacities: Little League baseball for 55 years, then continuing with baseball at Fox Creek Jr. High and Mohave High. When a softball coach was needed at Mohave High, John stepped in and moved from baseball to softball. When he wasn't coaching, you could find him alongside Yvonne helping her run the snack bar at the games. John remained in touch with more than half of the young men and women he coached over the years.
John was also involved in St. Margaret Mary Catholic Church and helped with the annual Family Fun Festival and serving coffee and donuts on Sunday. He will be remembered for his sweetness and charm.
John is survived by his beloved wife, Yvonne; their six children, Norma Sepulveda, Cathy (Richard) Melendez, Chris (Alison) Patton, Sabrina Gannon, Alison (Corrado) Laurenza, and David Patton; ten grandchildren; twelve great-grandchildren; two great-great-grandchildren; and many nieces and nephews. He will be greatly missed by all.
The Funeral Mass is at 1:00 PM on Friday, January 14, 2022 at St. Margaret Mary Catholic Church, 1691 N. Oatman Rd, Bullhead City, AZ. The Rosary precedes the Mass at 12:30 PM.
All are welcome to join the family for a reception in the parish hall following the Mass. Burial of John's ashes will take place at Rose Hills Memorial Park in California.
In lieu of flowers, the family requests donations to St. Margaret Mary Building Fund.
Arrangements are under the direction of Desert Lawn Funeral Home, Crematory and Memorial Gardens.
Published by Mohave Daily News Online from Jan. 9 to Jan. 16, 2022.
To plant trees in memory, please visit the Sympathy Store.
MEMORIAL EVENTS
Jan
14
Rosary
12:30p.m.
St. Margaret Mary Catholic Church
1691 N. Oatman Rd, Bullhead City, AZ
Jan
14
Funeral Mass
1:00p.m.
St. Margaret Mary Catholic Church
1691 N. Oatman Rd, Bullhead City, AZ
Funeral services provided by:
Desert Lawn Funeral Home
MAKE A DONATION
MEMORIES & CONDOLENCES
3 Entries
I'd like to take this time to say goodbye to my dearest uncle Johnny, may you be at peace now and forever more...We loved you so
I. Shire Warren
January 14, 2022
So sorry to hear the news. We all will miss such a kind and supportive person.
Judi Reed
January 14, 2022
We are so saddened to hear Of John´s passing he was an amazing human he will be missed prayer to his family
Randy and Vickie Crawford
Other
January 8, 2022
Showing 1 - 3 of 3 results