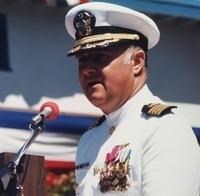 BORN
1936
DIED
2021
Capt. Charles Gibfried USNSC, Ret.
May 24, 1936 - May 17, 2021
Pebble Beach
Chuck Gibfried passed on May 17, one week before his 85th birthday. He was at home in Pebble Beach surrounded by his family. Chuck was a loving husband, father and friend, always quick with a story or joke. He loved sports, camping, traveling and drinking wine; sometimes all at the same time. He was a natural teacher and mentor, encouraging you to do your finest. Although he could chew-you-out with the best, he was also one of the nicest people you could meet. He was fair and generous and impressed those who knew him with his thoughtfulness; he was quick to say thank you.
Chuck was born in Chicago, Illinois and graduated from Arlington Heights High School. He received a BS in Business from the University of Illinois and later received an MS with honors from the Naval Postgraduate School (NPS) in Computer Science. While in the Navy, he served as Supply officer on the U.S.S. Blair, U.S.S. Paricutin, U.S.S. Orca and two tours on the aircraft carrier U.S.S. Enterprise. While on the U.S.S. Paricutin in the Philippines, he met the love of his life, Marilyn Wollgast, at 4:30am in the Manila Hotel elevator. Marilyn was a PanAm flight attendant and both were catching an early flight to Baguio. Their 58 year marriage was blessed with a son, Russ (Kate), daughter Kim Ireland (John), and five wonderful grandchildren: Kayla, Nate, Aubrey, Riley and Samantha.
Besides an accomplished 26 year naval career, Chuck was also a successful executive, consultant and educator with IBM, SAIC and NPS. He will be remembered by his many friends, nieces, nephews and older brother Paul. He was preceded in death by his other older brother, Jack, who survived the first wave on Omaha Beach on D-Day.
Chuck was a member of many local organizations including the St. Thomas Aquinas Catholic Chapel at NPS.
The family wishes to thank and acknowledge the compassionate care provided by Dr. Mary Roberts and her staff at the VA, caregivers Teri Porteous and Yesenia Batres and the VNA Hospice Team.
Chuck will be inurned with military honors at the Central Coast Veterans Cemetery on Thursday, June 3rd at 3:30pm. There will be a reception to follow at the Bayonet/Black Horse Golf Course clubhouse (all are invited). Masks required at Central Coast Veterans Cemetery. In lieu of flowers, remember your loved ones and support your favorite charity.


View the online memorial for Capt. Charles Gibfried USNSC, Ret.
Published by Monterey Herald Obits on May 27, 2021.
To plant trees in memory, please visit the Sympathy Store.
MEMORIAL EVENTS
To offer your sympathy during this difficult time, you can now have memorial trees planted in a National Forest in memory of your loved one.
MAKE A DONATION
Please consider a donation as requested by the family.
MEMORIES & CONDOLENCES
Sponsored by Monterey Herald.
1 Entry
I loved Chuck so much! He was always so kind to me. He will be missed greatly.
Annette Estes
Friend
June 1, 2021
Showing 1 - 1 of 1 results