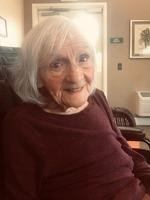 BORN
1926
DIED
2021
Pauline Jacobsen
April17,1926 - August 29, 2021
Monterey, California
Pauline "Pabla" Hernandez Jacobsen, 95, the youngest child of Spanish immigrants and a lifelong resident of Monterey, passed on August 29, 2021. She was born on Easter Sunday, April 17, 1926, in her family home on Van Buren Street.
At her tallest she was 5'1" but that included the 3" platform shoes she loved to wear well into her 90's. When people would comment how little she was, her immediate response was, "Good things come in small packages but so does dynamite!"
In her youth, she was quite a talented Spanish dancer and would dance on stage in San Francisco. After graduating from Monterey Union High School she went to work as a secretary in Fort Ord and attended dances at the USO. She recalled being at the State Theater when the show stopped and it was announced that Pearl Harbor had been bombed. Everyone left in silence. This was yet another World War ll experience of one from the Greatest Generation.
Pauline met her husband-to-be, Charles Robert, "Bob", "Jake" Jacobsen, a PG boy, at Pep's creamery in Carmel. He passed her a little note asking to meet her and the rest was history. They were married in 1948 and lived happily ever after until his death in 2004.
She was a fastidious homemaker who had a little daycare at her home for many years. She also worked at Woolworths during the holidays and Couroc until the mice scared her away. She was deathly afraid of rodents. Her home, above all else, was her happy place.
In her later years Pauline could be seen walking from her Monte Regio home on Via del Rey to downtown Monterey, the cemetery, or Sunday Mass at San Carlos, sometimes snagging a shopping cart for stability while walking back up the hill.
Her family meant the world to her. She leaves behind her daughters, Pam Jacobsen-Tognetti, Sharon Jacobsen Lucchesi (George), many nieces and nephews, and her grandchildren, Juliette Robertson (Stephen), Cara Lucchesi, Jay Tognetti, Christie Cuthbert (Mark) and Christina Schrock (Devin). She was a very loving and giving grandma blessed with 12 great-grandchildren who filled her life with joy.
With arms open wide she will be joining her loved ones who preceded her in death: her ever devoted hubby, Bob, her wonderful parents, Estefania and Manuel Hernandez, her dear siblings Mary Martin (Fabian), Marie Rodriguez (Jimmy), Connie Salinero (Pete), Augie Diaz (Frank), Frank Hernandez and her nieces and great-nephew Stephanie Martin, Linda Rodriguez and Darren Sullivan. She'll rejoice in their company and share Christmas Eve crab with them whenever she desires.
As per her wishes, no service will be held. If so inclined a donation in her memory can be made to Gateway Center, 859 Congress Avenue, Pacific Grove, CA 93950.


View the online memorial for Pauline Jacobsen
Published by Monterey Herald Obits on Sep. 17, 2021.
To plant trees in memory, please visit the Sympathy Store.
MEMORIAL EVENTS
To offer your sympathy during this difficult time, you can now have memorial trees planted in a National Forest in memory of your loved one.
MAKE A DONATION
MEMORIES & CONDOLENCES
Sponsored by Monterey Herald.
2 Entries
The last of the Hernandez sisters, Aunt Pauline was always a bit "Kooky" though always in a positive way. She leaves me with very fond memories of wonderful times with family. I love you my little Aunt and I will miss you. Judy Salinero Dillon.
Judy Dillon
Family
September 17, 2021
Sharon and Pam my sincere condolences. Gaga lived such a good life. She was like my second mom. I loved her so much and we did everything together. I will always remember the walks to Safeway, Woolworths, etc... And of course the sleepovers. My prayers are with you and the entire family during this time.
Michele Vaughan
Friend
September 17, 2021
Showing 1 - 2 of 2 results