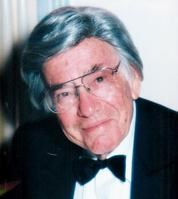 BORN
1918
DIED
2015
Richard W. LaSalle
January 18, 1918 ~ April 5, 2015
Carmel, CA
Richard W. LaSalle passed away on April 5, 2015 at his home in Carmel, CA. Richard was born in Louisville, Colorado. He began as a performer for local hotels as a pianist and orchestra leader between the 1940s and 50s. He had his own orchestra for over 18 years and played all over the country. In 1958 he joined the American Society of Composers and Publishers in which he started his main career in film composing. His first work was done for a 1958 movie called Tank Battalion starring Frank Gorshin. Other works of composing include Diary of a Madman, Twice Told Tales, Conflict Stage, Fort Courageous, A Yank in Vietnam, Ambush Bay, 40 Guns to Apache Pass and many more. His total work included over 400 films. Richard and his wife of 73 years, Patricia, moved to Carmel over 30 years ago. Richard was a member of the Carmel-by-the-Sea Rotary Club and a Past Vice-President of the Monterey County Symphony. Richard and Patricia, who preceded him in death, traveled all over the world, spending over three years cumulatively on ships of Seaborne Cruise Line.
A special thank-you to Central Coast Senior Services and Hospice for their loving care at the end of Richard's life. In lieu of flowers, donations to the music program of the Carmel Youth Center would have been Richard's wish.
Published by Monterey Herald Obits on Apr. 26, 2015.
To plant trees in memory, please visit the Sympathy Store.
MEMORIAL EVENTS
To offer your sympathy during this difficult time, you can now have memorial trees planted in a National Forest in memory of your loved one.
MAKE A DONATION
MEMORIES & CONDOLENCES
Sponsored by Monterey Herald.
6 Entries
Remembering Richard LaSalle and his music today.
Randall Larson
April 20, 2019
His music for film is so very inspiring!
James Parker
December 13, 2016
Ralph Terrana
August 3, 2015
He was a very fine,interesting film composer. He may've been one of the more lesser known composers but his work is definitely worth looking into. The music he did for Irwin Allen's tv series is very,very good.
June 23, 2015
Mr. LaSalle was an excellent composer whose work I greatly admired. His music energized even the smallest-budget films and gave passion and excitement to their drama. I am very sorry to learn of his passing and convey my condolences to his family and all who enjoyed and respected his music.
Randall Larson
May 5, 2015
You have my deepest sympathy. May the God of loyal love comfort the family during your time of sorrow. Psalm 119:76
April 29, 2015
Showing 1 - 6 of 6 results