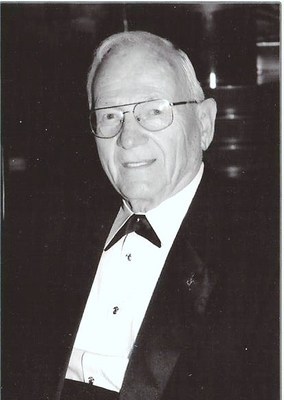 Bob graduated from the Mount Berry School for Boys in Rome, GA. In July 1946 during World War II, he enlisted in the U.S. Marine Corps and served three years. He re-enlisted in 1951 and served during the Korean conflict until 1952, attaining the rank of Sergeant. His squadron VMF223 was attached to USS Franklin D. Roosevelt, USS Tarawa, and USS Midway. He graduated from Auburn University in Business Administration in 1954 and was employed by Alabama Farm Bureau Insurance Company, which later became Alfa Insurance Companies. He retired as vice president after 41 years.

Bob was active in many historical/genealogy organizations. He was State President of Sons of the American Revolution and Governor of the Alabama Company of the Jamestowne Society. He was also President of the Richard Montgomery Chapter SAR, the Montgomery Genealogy Society, and the Old South Historical Society. Additionally, Bob was a member of the Sons of the American Colonists, Sons and Daughters of the Pilgrims, Somerset Chapter Magna Charta Barons, Huguenot Society, Order of the Crown (Charlemagne Descendants), National Society Sons of the War of 1812, Merovingian Dynasty, Sons of Spanish American War Veterans, Society of Descendants of the Most Noble Order of the Garter, Military Order of the Crusades, Society of Descendants of Washington's Army at Valley Forge, and Sons of the Colonial Wars.

Bob was also involved in various civic activities. After serving over 35 years ago for two consecutive terms as the District Governor of Civitan International Alabama - West Florida District, in 2011 Bob again served as president of the Montgomery Civitan Club. He was active in this club for over 50 years Bob was also Commandant of the Townsend Chapter of the Marine Corps League, and President of Montgomery Knife and Fork Club. A member of the Sigma Phi Epsilon Fraternity, he served for 22 years as chapter counselor for the Alabama Epsilon Chapter at Auburn University Montgomery and was awarded the Order of the Golden Heart, the highest national award for volunteer service to Sigma Phi Epsilon Fraternity.

Involved with his children's activities, he served as PTA president of and officer in Little League Baseball and participated in Boy Scouts of America for 25 years as Cub Master, Scout Master, and District Commissioner. Formerly an active member of the Capitol Heights United Methodist Church where he was a lay leader, in 2011 Bob joined Whitfield Memorial United Methodist Church, where he was a Sunday School teacher and on the Board of Trustees.

After retirement, Bob worked as a volunteer at Baptist South for over 16 years and served many years as a volunteer on the Pre-Trial Diversion Committee. Additionally, Bob and Ann were Goodwill Ambassadors for 50 classes of International Officers in the IOS Program at Maxwell AFB.

In lieu of flowers, the family is asking that contributions be made to the Robert Cheney Memorial Fund, Whitfield Memorial United Methodist Church or the charity of your choice.

Published by Montgomery Advertiser on Aug. 9, 2013.
To plant trees in memory, please visit our Sympathy Store.
MEMORIAL EVENTS
To offer your sympathy during this difficult time, you can now have memorial trees planted in a National Forest in memory of your loved one.
Funeral services provided by:
Leak Memory Chapel
MAKE A DONATION
Please consider a donation as requested by the family.
MEMORIES & CONDOLENCES
22 Entries
My thoughts and prayers are with The Cheney Family for the loss of their dear husband,father and grandfather. Ann, Bob was a wonderful Governor of the Alabama Company, Jamestowne Society, and I sincerely enjoyed working with him over the years. He had such a wonderful sense of humor and he definitely loved life. May God bless you and keep you in his arms.
Carolyn K. Farmer, Jamestowne Society
Carolyn K. Farmer
August 30, 2013
With Our Most Deepest Sympathy, To The Family of Mr. Bob Cheney... You are in our Prayers daily, in Our Hearts hourly... in Our Thoughts always. The Stinson's.
Jesse, Emily and Jalen Stinson
August 15, 2013
Bob, on behalf of the JD Class of 1973, as well as myself and my family, I would like to offer my sympathy for your loss. Your dad was so important to scouts, as was my dad who went "home" 18 months ago. You are in our prayers.
Kevin Rowe
August 15, 2013
On behalf of the Jamestowne Society, I extend sympathy to the family and friends of Bob Cheney, who served the Society well as Governor of the Alabama Company. He was a descendant of Joseph Royall who was listed in the Muster of 1624/5, an early Jamestowne ancestor.
Susan Godman Rager
August 13, 2013
Beth, I am so very sorry for the loss of your Dad. I know how much that hurts and will be keeping you in my prayers.
Tricia Hollis Crowley
August 12, 2013
you will be missed. HFF
Michael Parker
August 11, 2013
Ann, I am sorry to hear this. I worked with Bob for many years. He was friend and a good man.
Michael Harbin
August 11, 2013
Sorry to learn of your Dad"s death, Beth. Prayers for you and your family.
Betsy Schmitt
August 11, 2013
Ann,I am so sorry to hear about Bob--I know how it hurts and and how alone you feel at this time,because I have been there.If there is ANYTHING I can do for you or that you need, do not hesitate to call me,I will be more then happy to help . We all need our friends at times and this is one of those times. You have family and children around you right now , but when they must leave, and things are looking down call--I'll be here to listen or talk which ever you need.
marie sanford
August 11, 2013
Condolences to your entire family. May you find peace and comfort.
Carol Wells Pierce
August 10, 2013
I had the honor of being in Sigma Phi Epsilon . Mr. Cheney was our advisor . I also had the privilege to help Mr. Cheney while working Southern Homes and Gardens. I am sorry I cannot be at the service . I did want to pass my thought and prayers to his family. God speed.
Kirk-Allyn McKeen
August 10, 2013
I worked for Mr. Cheney at Farm Bureau (Alfa). My sincere thoughts and prayers are with all of you and I am so sorry for your loss.
Linda Beasley
August 9, 2013
To the Cheney family, Please accept our condolences. On behalf of the United States Marine Corps Recruiters of Montgomery, Auburn, and Prattville.

Semper Fidelis (Always Faithful)
Gunnery Sergeant Charles Luck
August 9, 2013
Beth, I am so sorry to hear this news. I have such found memories of your entire family especially your father & mother. Please know that my thoughts and prayers are with you all. My love to you & your family.
Ada Love
August 9, 2013
My family and I are so sorry for your loss. Bob was a great man and good friend and will be missed by the many people who knew him.
Carole LeMaster
August 9, 2013
Bob, I am sorry to hear of your loss./LL
Larry LeCroy
August 9, 2013
I had the pleasure of knowing Mr. Cheney when I worked at Alfa. He was a precious man. My prayers for peace and comfort are with you all.
Carolyn Hartman Greene
August 9, 2013
JC and I are so sad to learn of your father's passing, Elizabeth. Please know you are in our prayers.
Nancy Dupont
August 9, 2013
My condolences, Ann. Bob was a kind and caring man. I wish I had met him years ago.
Jerry Crumly
Jerry Crumly
August 9, 2013
Bill & Tammy Glass
August 9, 2013
Ann, our heart-felt sympathy and prayers go to your family. Bob was a mentor and integral part of my youth in scouting.
Chris Davenport
August 9, 2013
Mrs. Ann, getting to know you, your husband and your wonderful family was a privilege and a blessing. Will be keeping you all in my thoughts and prayers.
Erin Flanigan Caskey
August 8, 2013
Showing 1 - 22 of 22 results