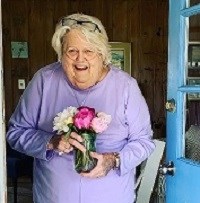 ABOUT
Upper Dublin High School
FUNERAL HOME
Urban Funeral Home
1111 S. Bethlehem Pike
Ambler, PA
Janet Minehart Maupay, 82, of Fort Washington, PA, died on March 29, 2021, at Abington Jefferson Health. She is the daughter of the late Thomas Z. and Janet M. Minehart. Janet graduated from Upper Dublin High School in 1957 and then attended Penn State University. She worked for many years at Robertson’s Florist in Chestnut Hill, helping establish their Seedlings Department. Affectionately known as Nanny, Janet spent her summers with her extended family, including her numerous nieces and nephews, at her beach house, “Summer Smiles,” on Long Beach Island. She had a way of making everyone in her life feel special, as she approached every relationship in her life with empathy and generosity. Everyone who knew her loved her dearly, and she will be greatly missed by all her family and friends. Janet is survived by her children Margaret and Walter Maupay; and her siblings Marylee Devenney, Charles R. Minehart M.D., and John R. Minehart. Her brother Thomas preceded her in death in 2019. Services were held privately. A celebration of her life will be held at a later date. In lieu of flowers, please donate to a charity of your choice in Janet’s honor. Tributes and photos may be shared at www.UrbanFuneralHome.com
Published by Montgomery Newspapers from Apr. 1 to Apr. 11, 2021.
To plant trees in memory, please visit the Sympathy Store.
MEMORIAL EVENTS
To offer your sympathy during this difficult time, you can now have memorial trees planted in a National Forest in memory of your loved one.
Funeral services provided by:
Urban Funeral Home
MAKE A DONATION
Please consider a donation as requested by the family.
MEMORIES & CONDOLENCES
Sponsored by Family.
0 Entries
Be the first to post a memory or condolences.