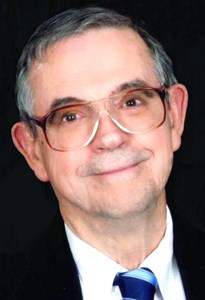 Albert was born June 15, 1938, at Lowrance Hospital, to the late A. Banks Culp and Eula Martin Culp. In addition to his parents, he was preceded in death by a brother, Julian Culp.

Albert, known as Al, was a loving, loyal husband, father and grandfather. Albert married Sharon Carpenter in 1963. They were married for 57 years.

Albert graduated from Mooresville High School. He was president of the student body and a member of the band. He graduated from UNC-Chapel Hill and was a member of Alpha Kappa Psi fraternity. He was a Tar Heels fan, winning or losing. GO HEELS!

Returning to Mooresville, he became actively involved in scouting, being an Eagle Scout himself. He loved his church and the church family. He served as a deacon and elder being the Clerk of Session for First Presbyterian Church. He loved his Lord and Savior and lived his life to glorify them.

Albert served his community by serving in the National Guard, Kiwanis Club, South Iredell Soccer Association, Community Chorus and was a charter member of the Mooresville Museum serving on the board of directors.

Albert's career in business was as a corporate tax manager. He worked for several companies but retiring from Verbatim.

In lieu of flowers, memorials may be sent to First Presbyterian Church, 249 W McLelland Ave., Mooresville, NC 28115 or to the Hospice & Palliative Care of Iredell County, 2347 Simonton Rd., Statesville, NC 28625.

www.cavin-cook.com
Published by Mooresville Tribune on Jun. 13, 2021.
To plant trees in memory, please visit the Sympathy Store.
MEMORIAL EVENTS
Jun
13
Memorial service
3:00p.m. - 4:00p.m.
First Presbyterian Church
249 W, Mooresville, NC
Jun
13
Service
4:00p.m. - 5:00p.m.
First Presbyterian Church
249 W, Mooresville, NC
Funeral services provided by:
Cavin-Cook Funeral Home & Crematory
MAKE A DONATION
MEMORIES & CONDOLENCES
Sponsored by Cavin-Cook Funeral Home & Crematory.
1 Entry
Dear Friends: I just today read of Al's passing and am so very sorry. I knew he had been in somewhat declining health for a while. God bless you Sharon, Laura, Ross and all those grands! I have very fine memories of all of you and loved singing tenor with Al and Roy Watkins! Al was a swell guy! God bless you all!
Willie Beaver
Family
June 26, 2021
Showing 1 - 1 of 1 results