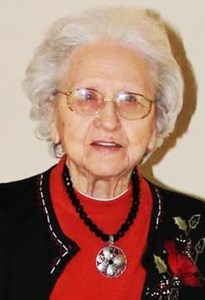 Funeral services were held at 11 a.m., Friday, June 18, at Edgewood Baptist Church with the Revs. Eddie Tharpe and Julius Blevins officiating. Burial was held at the church cemetery. The family received friends from 10 to 11 a.m., at the church, prior to the service.

Mrs. Robinson was born Dec. 25, 1921, in Fieldale, Va., to Melvin and Minnie Poe Macy. She was a member of Edgewood Baptist Church.

In addition to her parents and five siblings, Mrs. Robinson was preceded in death by her husbands; James Grady Bullard and Major Connie Robinson; and one stepgreat-great-grandchild.

Flowers will be accepted or memorials may be made to Edgewood Baptist Church, 2300 Edgewood Rd., Wilkesboro, NC 28697; or Gordon Hospice and Palliative Care, 2347 Simonton Rd., Statesville, NC 28625.