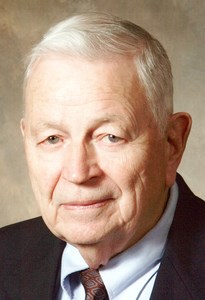 David Wilson Conley, 95, passed away Monday, June 21, 2021, with his loving wife of 60 years, Clara Jane Dailey Conley, by his side at their home in Huntsville, Ala.

David received his early education at Burke County schools and graduated from Morganton High School in 1942. At the age of 17, he enlisted in the U. S. Navy. He served as an Aircrewman, patrolling the South Pacific during World War II. He was an honoree on the Honor Flight to Washington, D.C., in 2008.

David received a BS degree in mechanical engineering from NC State University in 1952. He began his career at Shell Oil Company in Texas. Later, he was employed with Douglas Aircraft in Charlotte, as a project engineer for the Nike Hercules Missile Program. He moved his family to Huntsville, Ala., in 1963, after joining Brown Engineering Company. Shortly after David joined NASA Marshall Space Flight Center as an engineer manager and became technical manager of Boeing and Chrysler's Saturn 5 engineering support contracts. He retired from NASA after an exemplary 25-year career.

David was active in the Methodist Church all his life, including as a member of Latham United Methodist Church in Huntsville, Ala. He was also a member of the United States Junior Chamber (Jaycees), American Society of Mechanical Engineers, and a registered professional engineer in Alabama.

He was preceded in death by his parents; his son, Murry Jonathan Conley; and sister, Mary Elizabeth Keegan.

He was a devoted and loving husband, father, grandfather and brother, and he will be terribly missed and dearly remembered by those who knew and loved him.

Services were held Friday, June 25, at Maple Hill Cemetery in Huntsville, Ala., conducted by the Rev. Robert Sparkman.

The family asks memorials be made to Latham United Methodist Church, P.O.4267, Huntsville, AL, 35815; or the Alzheimer's Association (act.alz.org).