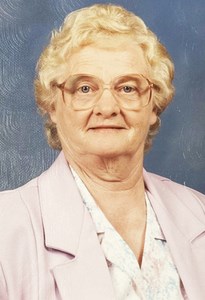 Gurthie Morgan Hunter, 94, of Marion, North Carolina, went to be with her Lord and Savior Friday, June 18, 2021, at Fair Haven Home in Bostic.

Gurthie was born April 13, 1927 and grew up in Glenwood. She started working in the hosiery mill before her and her husband, Roy, started Hunter's Livermush in 1955. She worked there until she turned 70 years old. Even then, she still wanted to be the boss and gave her input and knowledge to her children to run the business.

Her whole life was her four children, Hunter's Livermush, and God. She always talked about God and making it to Heaven. The Bible says you are rewarded with years if you love and worship God. For her to make it to 94 tells it all. She often said age is just a number and that she didn't feel 94. She also said she never thought she'd live this long.

A few weeks before her passing, she said she understood why you have to die. The world changes so, that it's not your world, and you are lost, so you might as well go Home.

A funeral service will be held on Wednesday, June 23, 2021 at 11:30 a.m. in the Chapel of Beam Funeral Service with the Reverends Kerney Wilson and Danny Peterson officiating. The family will receive friends from 10:30 until 11:30 a.m. Interment will follow at McDowell Memorial Park.

Beam Funeral Service is assisting the Hunter family. For further information and/or to sign the guestbook, please visit www.beamfuneralservice.com, or call (828) 559-8111.