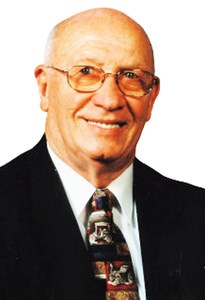 Walter "Steve" Wright, 87, of Morganton, transitioned peacefully from his home on earth to his Heavenly home Tuesday, July 13, 2021.

Born in Lincoln County Jan. 14, 1934, to William "Lloyd" Wright and Estelle Yount Wright, both of whom had gone on before him, Steve was a retired law enforcement officer.

Steve served as an officer with Morganton Police Department during the civil rights riots of the 1960s. His commitment to fairness and equality was evidenced by the number of citizens in predominantly black neighborhoods who would ask for him by name when they needed assistance. In 1972, he went to work at Western Youth Institution, where he retired as Lead Correctional Officer over the transportation department. Steve grew up attending Salem Methodist Church, was a devoted member of Walker Road Baptist Church for many years and was a member of Central Baptist Church at the time of his passing.

In addition to his parents, Steve was welcomed Home by his wife of 36 years, Kathy Early Wright; brothers, Aaron Wright and Danny Wright; and one great-grandson, Thomas Hamlin.

Left to carry on his legacy of love and laughter are those who called him "Dad," Ron Richards (Terri) of Charlotte, Pam Chapman of Hildebran, and Kale Wright (Dennis Duffy) of Decatur, Ga.; those who called him "Paw-Paw," Meredith Hamlin (Ben) of Grand Rapids, Mich., Matt Richards (Maria Kartsaklis) of Charlotte, and Millie Lacy (Ben) of St. Francis, Kan; the next generation of "Paw-Paw" loving children, Jack, William, and Katherine Hamlin, all of Grand Rapids, Mich; the best family of cousins a person could ever have, and more friends and loved ones than stars in the sky.

The family will receive friends at Sossoman Funeral Home Saturday, July 17, at 12:30 p.m., with a funeral to follow at 2 p.m. in the chapel. Steve will return to his wife's side, as he is interred at Burke Memorial Park following the service.

In lieu of flowers, the family requests donations be made to Amorem (formerly known as Burke Hospice).

www.sossomanfh.com
To plant trees in memory, please visit our Sympathy Store.
Published by The News Herald on Jul. 15, 2021.
MEMORIAL EVENTS
Jul
17
Visitation
12:30p.m.
Sossoman Funeral Home
1011 South Sterling Street, Morganton, NC
Jul
17
Funeral
2:00p.m.
Sossoman Funeral Home
1011 South Sterling Street, Morganton, NC
Funeral services provided by:
Sossoman Funeral Home
MAKE A DONATION
MEMORIES & CONDOLENCES
Sponsored by Sossoman Funeral Home.
7 Entries
Steve has had a lasting impression and influence in my life as an adult. He gave me a job helping him on his bread route in Boone, North Carolina when I was only 11 years old. I helped him until I was 16 years old. Everyone is our area loved Steve. He will always hold a special place in my heart and helped to shape my life into what it is today. To all the family, you had a wonderful Father and Grandfather.
George Ashley
Friend
July 17, 2021
Ron, Your dad surely had God's light in his heart. The only way to live in this temporary home. Praise the Lord. Love you and Terri
Ron Godfrey
July 16, 2021
Times like these are sad only for those left behind. Someday you will be together again. Until then , remember the good times you shared.
Jeff Gross
July 16, 2021
Ron: I am sorry about your loss. With deepest sympathy. Tom Kudo
Tom Kudo
Other
July 16, 2021
Ron, I was so very sorry to hear the news about your father. He must have been an amazing man. You and Terri are in my thoughts and prayers. May God's blessings be with you during this time.
Susan Martin
Family
July 15, 2021
Dear Ron and Family, Your Dad must have been a wonderful person who was greatly loved by all. May you and the entire family feel God´s peace and presence. All of you are in my prayers. Love, Ken
Ken Lowery
Family
July 15, 2021
We have lost a great cousin! Ron, Pam and Kale he was so proud of you and your families. He would laugh and smile when he talked about y'all and your families. He had a "contagious" personality that drew you to him and you just wanted to listen to him talk. He reminded me of Daddy Yount with his strong shoulders standing up so tall and never meeting a stranger. I will miss him! May our loving God surround all of you with his loving arms and give you comfort and peace, knowing he is at home w his heavemly Father. And welcomed at the gates by his loving family, especially Kathy. Love y'all very much. Joyce
Joyce and Paul Poovey
Family
July 15, 2021
Showing 1 - 7 of 7 results