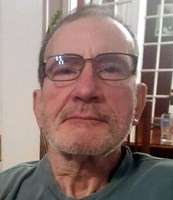 BORN
1947
DIED
2021
ABOUT
Morris Community High School
FUNERAL HOME
Forsythe Gould Funeral Home Inc
507 S. State Street
Manhattan, IL
Joseph Louis Cheshareck, "Joe"
Joseph Louis Cheshareck, "Joe", age 74, passed away peacefully at his home on Wednesday, June 16, 2021 with his loving and devoted wife of 44 years, Karen (nee Anderson) at his side. Joe is survived by his three children Lea (Arman) Qalhashahi, Jo (Nathan) Riggle and Gordon Cheshareck, his grandchildren June and Henry Riggle, his brother Michael Cheshareck, and numerous nieces, nephews, cousins and friends. Preceded in death by his parents Anthony and Mary (nee Karpowicz) Cheshareck, his parents in-law Gordon and Alice Anderson, siblings Anthony, Robert, John, Tom, and Deloris. Joe was born in Morris in 1947 and grew up in a house downtown alongside the I&M canal near other family in town. He attended Immaculate Conception Catholic grade school and Morris Community High School. Joe was drafted and served honorably in the U.S. Army during Vietnam as a Military Policeman. He then went to Southern Illinois University and received his degree in Art. Shortly after graduating college, he married Karen. Joe enjoyed working outside and worked for and retired from Laborers Local 75. During this time, he had the pleasure of working frequently with his best friend Rodney Johnson and their families became close. After retirement, he went to work with his wife settling into their forever home. Joe was a quiet but colorful character and seemed larger than life to his kids and he will be lovingly remembered for his hard work, easy smile, and happy eyes. Funeral services for Joe will take place on Wednesday, June 23, 2021 beginning with visitation from 9:30 – 10:30 A.M. followed by Mass of Christian Burial at 10:30 A.M. at Immaculate Conception Catholic Church, 516 E. Jackson St., Morris. Interment with full military honors will take place at 12:30 P.M. at Abraham Lincoln National Cemetery, Elwood, IL. In lieu of flowers, donations in Joe's name to Immaculate Conception Catholic Church would be most appreciated. Arrangements entrusted to Forsythe Gould Funeral Home, 507 S. State St., Manhattan, IL 60442, 815-478-3321, www.forsythegouldfh.com.

Published by Morris Herald-News from Jun. 18 to Jun. 22, 2021.
To plant trees in memory, please visit the Sympathy Store.
MEMORIAL EVENTS
Jun
23
Visitation
9:30a.m. - 10:30a.m.
Immaculate Conception Catholic Church
516 E. Jackson St., Morris, IL
Jun
23
Mass of Christian Burial
10:30a.m.
Immaculate Conception Catholic Church
516 E. Jackson St, Morris, IL
Jun
23
Interment
12:30p.m.
Abraham Lincoln National Cemetery
Elwood, IL
Funeral services provided by:
Forsythe Gould Funeral Home Inc
MAKE A DONATION
MEMORIES & CONDOLENCES
Sponsored by Forsythe Gould Funeral Home Inc.
4 Entries
Joe had an infectious and winning smile, an ever-present twinkle in his eyes and a great sense of humor. We graduated together from Joliet Junior College, on the night of 9 June 1968. I had not been in contact with him since that night, but I will always recall with pleasure what a delightful and classy person he was.
Dick Bradley
School
July 7, 2021
Joe (surfer joe) as he signed in my yearbook was a very good friend. Did a lot of skateboarding back in the day together. 64-65. Remember when he flipped burgers, can't remember the name of the place. sorry to learn of your loss.
Charles Johnson
School
June 23, 2021
I'm so sorry to hear about Joe. Great guy. We were friends way back in the day and John and I were also very good friends. So funny and always so nice no matter what. Didn't know til now that my husband Tod worked with him thru the Laborers, too. Said he always had fun working with him. My condolences to family. Donna Gabehart (Sisk)
Donna Gabehart (Sisk)
Friend
June 20, 2021
I am so sorry to hear of Joe's passing. Lynne Arias, Jean Batchelor, and Bill + Kathleen Cheshareck + family. We will be making a donation in Joe's name to the Karpowicz Library at I.C.S. in Morris.
Lynne L. Arias
Family
June 18, 2021
Showing 1 - 4 of 4 results