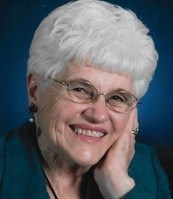 BORN
1931
DIED
2021
Margaret "Marge" Broucek
(nee Favero)
Born: September 18, 1931 in Felix, IL
Died: April 4, 2021 in Braceville, IL
Age 89, of Braceville, IL passed away peacefully with her family by her side on Easter Sunday, April 4, 2021 at her home. Born September 18, 1931 in Felix Township, IL to the late Thomas and Mary (nee Kuzel) Favero. Marge graduated May 27, 1949 from Coal City High School. She was a member of the Assumption of the Blessed Virgin Mary Catholic Church in Coal City, where she was very active with the Martha's Parish Funeral Luncheon Committee. Marge was an outstanding homemaker, she not only kept her house and family in order, but did so while working alongside with her late husband, John farming. She and John were also former members of the Grundy County Farm Bureau. Later in life, Marge enjoyed traveling on bus trips with her best friends that were hosted through the Godley Park District and Mazon State Bank. She was known for her cooking and baking skills, from baking wedding cakes for friends and family, and cooking delicious holiday meals. Her favorite holiday was Easter, knowing she passed on her favorite holiday surrounded by her family for the last time was a blessing for her and her family. Surviving are three sons, Stephen (Karen) Broucek, Robert (Karen "Liz") Broucek, and John III (Dawn) Broucek; five grandchildren, whom will forever cherish the time spent on the farm with their grandparents are John IV (Jami) Broucek, Hollie (Jake) Mallaney, Kellie (Joe) Brown, Andrew (Maggie) Broucek, Matthew (Lauren) Broucek; two step-grandchildren, Danielle Coleman and Dominique Stegall; 10 great-grandchildren and one on the way; special nephews and niece, Tom Favero, Tony Favero, and Jane Favero; and many other nieces, nephews and their families. Preceding her in death were her parents; husband, John Broucek (6/7/2020), whom she married September 13, 1953 in Coal City; two brothers, Anton (Dorothy) Favero and Thomas (Jessie) Favero; three sisters, Dorothy (Elvin) Wills, Barbara (George) Boyd, and Mary Jane Favero; and one step-brother, Frank (Vera) Kuzel. Cremation rites have been accorded. A Memorial Mass for Marge will be at the Assumption of the Blessed Virgin Mary Catholic Church in Coal City, Thursday, April 8, 2021 at 11:00 a.m. with a visitation one hour preceding services. Inurnment will follow at Mt. Olivet Cemetery, Braidwood. In lieu of flowers, memorial donations in her name may be directed to the Assumption of the Blessed Virgin Mary Building Fund or to the Joliet Area Community Hospice Home would be appreciated. For more information and to visit her online guestbook, please log on to www.rwpattersonfuneralhomes.com or find us on Facebook.