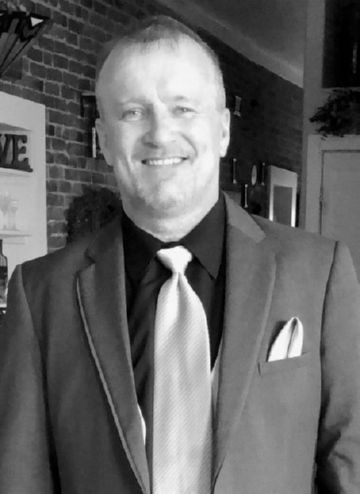 In the early morning hours of April 26th, 2021, Brian passed away in his sleep at his home in Butte, Mt.

Brian David Bouley was born on August 5th, 1970 the 3rd child of Ben and Carol Bouley.

He attended and graduated from Butte High School and The University of Montana. He then moved to a career at the Montana State Crime Lab and became a Firearms and Toolmarks Examiner under the guidance of his friend and colleague Allen Boehm. Brian enjoyed his work and the friends he made while employed for the state. Brian also did some private consulting for criminal cases.

Brian excelled in Tae Kwon Do at an early age and rose to the rank of black belt under the instruction of Martin Martin. He restored a 1968 Chevy Camaro, which he retained to this day. He loved hunting, fishing, trapping and anything outdoors. He loved to bring family and friends hunting and help them "get the big one." He especially enjoyed our hunting trips to eastern Montana that included visiting friends. Brian had a special love for baseball-Boston Red Sox. When it came to NFL football, he was a lifelong Miami Dolphins fan, but retain his love for the Montana Grizzlies.

Brian is survived by son- Wade, Parents- Ben and Carol, brother-Ben (Karen), nieces-Alyssa, Shelby, Erynne, sister-Michelle (Darell), half-brother-Tony Lewis. He is also survived by Aunt and Uncle Ken (Betty) Herrly, and several cousins. Brian is also survived by many dear friends that he held very close to his heart. He was preceded in death by cousin Mike LaPier, Aunt Barbara Thompson.

Memorials can be made to the Butte Food Bank or the donor's choice.

Please visit www.buttefuneralhome.com to offer a condolence or share a memory of Brian.

Axelson Funeral and Cremation Services has been privileged to care for Brian and his family.

Published by The Montana Standard on May 2, 2021.
To plant trees in memory, please visit the Sympathy Store.
MEMORIAL EVENTS
May
4
Funeral Mass
10:00a.m.
St. Patrick Catholic Church
329 W Mercury St, Butte, MT
Funeral services provided by:
Axelson Funeral & Cremation Services
MAKE A DONATION
MEMORIES & CONDOLENCES
Sponsored by Axelson Funeral & Cremation Services.
10 Entries
My heart goes out to you!
Lori Berry
May 4, 2021
I´m gonna miss you soooo Dam much .. I LOVE U I LOVE U SOOO MUCH
Chester
May 3, 2021
So sorry for your loss. May memories comfort you
Bruce and Dee Chatriand
May 3, 2021
Rest in piece my friend
Billy Hornsby
May 3, 2021
My condolences go out to the Bouley family and friends. Brian defined the meaning of true friendship. My heart breaks, but am fortunate to be left with 30 years of amazing memories. You will always be loved and missed my friend!
Bill Everett
May 3, 2021
Sorry for your loss of your son and brother
Emily svejkovsky
May 2, 2021
Michelle and family, I am sorry to hear of your loss.
Lee Ann Evatt
May 2, 2021
We are so sorry for the loss of your son and brother
Stephanie and Topper
May 2, 2021
Sympathy to the Bouley family!
Bryan Seidita
May 2, 2021
Brian was one of those people that lit up a room when he entered and left it shining brightly when he left. Always full of love and antics with that devious smile. He touched so many people and will forever be missed but always remembered with a smile. Sending love and hugs to his wonderful family and friends!
Stacy Leipheimer
May 2, 2021
Showing 1 - 10 of 10 results