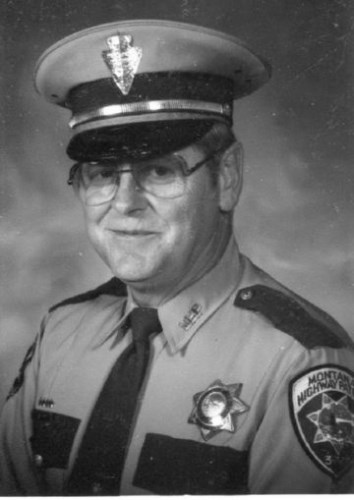 He was born to John Albert and Ione Forsman on September 19, 1937 in Anaconda, MT where he attended schools and graduated with the class of 1955.

He married his high-school sweetheart, Delores Kovacich, on June 16, 1956. They celebrated their 65th wedding anniversary a few weeks short of his passing.

Growing up, Harold loved spending his summers on the ranch riding his horse, Lucky, through the mountains, pulling shenanigans with his four siblings and, following his dad's death, working the ranch with his mom and the rest of the kids, Alice, Helen, Frank, and Clarence. A true outdoorsman, Harold enjoyed activities including hunting, trapping, snowmobiling, and drinking a cold beer by the fire.

Harold graduated from Montana Highway Patrol School in 1961 and began working in Dillon as a patrolman in 1962. He loved his job and caring for others while logging over a million miles in Beaverhead County at the time of his retirement from the patrol in 1990. Harold became the Beaverhead County Sheriff in 1992 and retired in 1998. Following this, he and Delores had many trips to different parts of the country of which he was so proud. Harold was a 52-year member of the Elks Lodge and a US Army Veteran.

He is preceded in death by his parents and three eldest siblings. Survivors include his wife, Delores, daughter, Peggy (Mark) Hall, and son, John (Pam) Forsman. His three favorite girls are his granddaughters: Nicole Yost, Meagan Forsman, and Kelsi (Kesewante) Nebiye. His younger brother, Clarence (Sharon), also remains. He never met a stranger and left many friends and family behind as well.

Published by The Montana Standard on Jul. 1, 2021.
To plant trees in memory, please visit our Sympathy Store.
MEMORIAL EVENTS
Jul
5
Visitation
6:00p.m. - 8:00p.m.
Brundage Funeral Home
300 S Atlantic Street, Dillon, MT
Jul
6
Funeral service
10:00a.m.
Brundage Funeral Home
300 S Atlantic Street, Dillon, MT
Jul
6
Graveside service
12:00p.m.
New Hill Cemetery
Funeral services provided by:
Brundage Funeral Home
MAKE A DONATION
MEMORIES & CONDOLENCES
Sponsored by Brundage Funeral Home.
4 Entries
Harold, my first cousin, was a wonderful man with a great sense of humor. My favorite memory was of him doing stunts riding on his horse on the ranch at Rock Creek. My sincere sympathy to Delores and family.
Carolyn Cregg Bossard
Family
July 6, 2021
So sad to hear of Uncle Harolds passing. We will remember his sweet smile and wonderful laugh. Our memories of him will stay forever in our hearts. He was truly a wonderful man and we will miss him deeply. Rest In Peace Uncle Harold.
Patty Seymour
Family
July 6, 2021
Prayers to Delores and family. Honesty, integrity, and fairness are words that describe Sheriff Forsman. An honorable man and a true public servant. He was an law enforcement member that young officers could look up to . I am beyond blessed to have been able to call him my friend. Rest easy Harold, your shift was completed perfectly .
Don Guiberson
July 1, 2021
Dear Delores, Peggy and John, I remember Harold always taking the time to stop on Morse Street and visit with me. I was fascinated with his car and his job. He always took the time to stop say hello and talk with me. I always appreciated that and lives in my memories. My condolences to the family for you loss. Harold surely left Dillon a much better place for his service. Blessings and prayers, Steve Fisk
Steve Fisk
July 1, 2021
Showing 1 - 4 of 4 results